Homecoming Trivial to Many 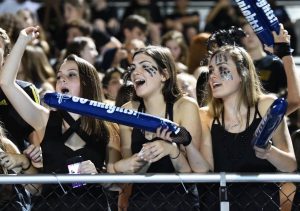 Seniors Jordan Shoulberg, Sienna Goren and Meggie Steiger dressed in black in keeping with the theme for the Homecoming game on Oct. 6. Photo: Fred Assaf

During the fall season, schools all over the country prepare for the century-long tradition of homecoming weekend. The combination of a football game, dance, pep rally, powder puff game and welcoming of alumni excites students and gives them something to look forward to after the first tough weeks back from summer. However, does Pace give students the thrill and excitement of homecoming that other schools do?

This year, the annual homecoming football game will be held Oct. 6 against The Westminster School. This game falls on the Friday before fall break, which reduces the number of students able to attend and cheer on the Knights. Because of the fall break dates, the dance and powder puff game were pushed to the following weekend in an effort to boost attendance. Pace’s splitting up of the different homecoming events diminishes the excitement of the big “homecoming weekend.”

For the past few years, attendance at the homecoming dance has been pretty low. Student Council works very hard each year to plan the dance and to increase attendance. Despite attempts to upgrade the music by adding a professional DJ, the number of attendees demonstrates how students do not prioritize going to the dance. Some students find the space in the FAC to be a bit too cramped as well. Many have suggested moving the dance to Boyd Gym for more space, but some argue that Boyd would be too big.

Pace diverges from the common tradition of asking a date to the homecoming dance. Asking someone to homecoming adds to the excitement of the dance that students at other schools get to experience. Making the homecoming dance an “ask dance” would increase student interest as well.

Homecoming weekend at Pace is not as big a deal as it should be. The hype of the long-lasting tradition found at high schools across the country is not evident in our homecoming. Perhaps combining the different events into one big weekend that doesn’t conflict with fall break, making the dance an “ask dance,” or adding better music could increase the thrill for it as a whole.