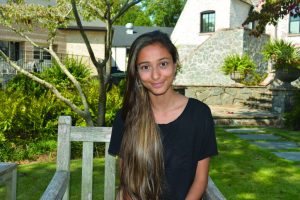 KN: When did you originally come to Pace and when did you leave for India?

IB: I joined in Pre-First and I left at the end of sixth grade, so this is my first year back.

KN: What caused you to move to India and then move back here?

IB: It was for my dad’s job. We had an offer to either move to Mumbai or Delhi. We decided to move to Delhi because we have family there: my grandparents and cousins. After a few years, the assignment was over so we moved back.

KN: Has Pace changed a lot?

IB: Yeah, I went from middle school to high school so the dynamic is a bit different, but it’s still the same – same friends, same community – so that was really nice.

KN: Was your school in India really different from Pace?

IB: It was an American school, so a lot of it was very similar, but there still are some pretty big differences because it served as the main International school for India.

KN: Was it hard to adjust from the U.S. to India?

IB: School-wise, it wasn’t too bad. In India it was easy to assimilate. All my classes worked well for me and were organized. At home, it was very different. Delhi and Atlanta are obviously so different, but it was a nice difference.

KN: What do you miss most about India?

IB: Probably seeing my friends and family. We don’t see my grandparents and my cousins often here, and we have very little family here since they are all overseas, so it was nice to hang out with them and get to know them better.

KN: What are the main differences between the U.S. and India?

IB: I’m Hindu, so while in Delhi, it was really nice to be able to celebrate the Indian holidays and traditions. For example, we got to do Holi, where you get to throw all of the colors. We also got a week off of school for Dwali [Hindu Festival of Light]. We had to strike a nice balance there of being Indian and American so that was nice. But regarding big differences, there really aren’t many.

KN: Were you still connected to America while in India?

IB: Yeah, we were at the American Embassy School so everything that happened in America was part of the embassy. We had John Kerry come visit us while he was still Secretary of State. There were lots of diplomats and a lot of my friends’ parents worked as diplomats or in the army. So, you’re still “American,” but you are just in India.

KN: If you could bring anything over from India what would it be?

IB: It would definitely be the holidays, like Holi. We never specifically celebrated Dwali there, and instead did it before and after because we would typically travel during that week. We did lots of sightseeing and traveling throughout Asia, so those things I would bring back.

KN: What do you do outside of school?

IB: Here, I just signed up for a bunch of clubs (laughs). I do Model UN and cross country. In India, I did badminton and student government and newspaper.

IB: Umm, I don’t really know. I like math a lot and English, too. I don’t know, I’m just kind of all over the place.

KN: You have a brother at Pace right?

IB: Yes, he is in eighth grade.

KN: Do you like being in school with him?

IB: Yes, we were always in school together in India. When we were younger, we were together in the Lower School, and we are really close at home.