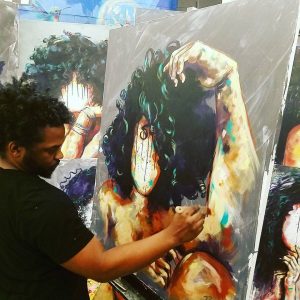 It is not at all surprising how well regarded the Pace arts program is in the Atlanta community. Theater productions pack the auditorium and students are routinely recognized for visual arts. Not everyone is likely aware, however, that one of the arts faculty members has created quite a name for himself outside the Pace community.

Recently, Mr. Bloodworth released a series of paintings of African American men and women without faces called the “Naturally Series.” These paintings have been a huge hit in the Atlanta art community. The idea for this series came from a previous collection that he had painted that focused “more on figure than faces,” according to Mr. Bloodworth. That collection “was more experimental,” he said. “In the beginning there was no intention, it was just for fun.”

However, one of those paintings gave Mr. Bloodworth the inspiration to create a whole new series focused on the natural hair movement. “It was a long process for him to get to that point,” said ceramics teacher Mark Knott. “But he hit that one piece, and it started this whole thing.” His new series focuses on the innate beauty of black women. “It was embraced by the natural hair movement, which is cool to me,” said Mr. Bloodworth. “That’s where it went, so it’s kind of celebrating that more than anything.” According to Mr. Bloodworth, each painting takes about an hour and a half to two hours to create. “That part of it is fun, too – getting it out and painting kind of fast,” he said.

Not only are these paintings cool to look at, but they also bring with them an empowering message to the black community. The fact that the hair of these young black women (and now, men) is unaltered from what they were born with sends a message that black women should not feel pressure to change the way they look to conform to societal norms.

“That part is fun,” said Mr. Bloodworth. “People can use it to feel better about themselves.” Instead of the beauty of an individual, the series focuses on a broader sense of beauty. “They appeal to almost everybody on a certain level,” said Mr. Knott. Because these paintings are finished without faces, it leaves the door open to imagination. “I like that people can see themselves in [the paintings],” said Mr. Bloodworth. “People read into them a lot more than I do.”

The paintings are available in print on Redbubble, along with bags, phone cases, clothing and other items screenprinted with the same images. His work can be found at https://www.redbubble.com/people/dacre8iveone/shop.