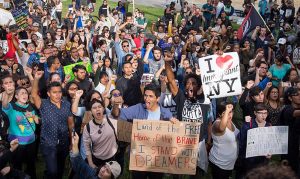 Massive protests against the rescinding of DACA have been held across the nation since the announcement on Sept. 5. Photo: Wikimedia user Rhododendrites

Many immigrants are brought here as children, and their families are being torn apart by the recent decision by the Trump administration to end the Deferred Action for Childhood Arrivals program (DACA). Thanks to the Trump administration, 800,000 people could be sent back to the countries where they were born with the expiration of the program six months from now. The countries they were born in, though, are not their home countries.

DACA allowed minors whose parents had entered the country illegally to be eligible to obtain two years of deferred action before deportation, and the ability to get a work permit. Although the program did not grant permanent citizenship, the deferrals from deportation and work permits could be renewed every two years. The policy was rescinded by the Trump Administration on Sept. 5, five years after the Obama Administration established it.

Conservatives and liberals have been bitterly fighting over this issue recently, with some conservatives arguing that the individuals do not belong since they were not born here, which is a heartless argument. These kids did not come of their own volition, yet they still want them to leave. Donald Trump campaigned on the idea that “Mexicans are stealing our jobs.” However, they are taking the jobs that others don’t want. They have families to feed, and they have lives of their own to live.

Three Republican Senators have proposed the SUCCEED Act, which is a 15 year path to citizenship. The senators are referring to these people as “DREAMers,” derived from the DREAM Act that was first introduced in 2010 but was never passed as legislation. This proposal is the type of progress that we need, but this path is certainly not easy. Applicants would have to pass a criminal background check and possess a high school diploma. The proposal would require applicants to have conditional permanent residence for ten years before they’d be able to apply for a green card. The DREAMers would only be able to apply for citizenship after five years of owning a green card.

Democrats have advocated for the DREAM Act, a bipartisan bill which proposes a direct route to citizenship for people who are either undocumented, have DACA or temporary protected status, and who graduate from U.S. high schools and attend college, enter the workforce, or enlist in a military program. Unlike the SUCCEED Act, the DREAM Act would allow conditional permanent residents to reside in the U.S. for only eight years until they are eligible for green card status. It will be an uphill battle for both parties to pass either act.

The problem is that people simply adopt other views as their own without studying the issues and forming their own opinions. This was one of the prominent problems regarding the 2016 election; people all over chose to embrace Donald Trump’s thoughts as their own. However, Donald Trump has stated that he does not want to punish children for the actions of their parents. The president has urged Congress to come to a decision on DACA. Congress failed to pass the DREAM act while Obama was president. Let’s hope these DREAMers aren’t forced to leave their home due to Congress’ inaction this time around.