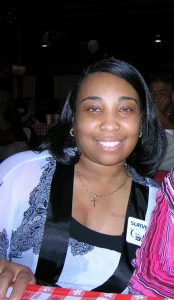 Ms. McCrary dines at a meal for the participants the day before the American Cancer Society Relay for Life race.
Photo: Ms. McCrary

The purpose of Breast Cancer Awareness Month is to promote awareness of the disease and to raise money to support research into developing a cure. Of the many fundraisers, one of the most popular is the Susan G. Komen Race for the Cure, which has raised over two billion dollars. The annual race is international, with nearly 150 different locations for the race and one million participants.

Ms. Nikki McCrary, assistant to upper school head Michael Gannon and a freshman Transitions program teacher, is a survivor of breast cancer. Ms. McCrary was diagnosed at the age of 29 with stage IIIB breast cancer. “I just wanted to get it out right away,” said Ms. McCrary. After hearing the news, she immediately wondered what her next steps needed to be.

According to Ms. McCrary, the treatments were the biggest obstacle in fighting breast cancer. “I had to do chemo to shrink the tumor, then I had to do radiation,” she said. “Radiation is six weeks every single day except Saturday and Sunday. That totally burns you, so I was burned from my neck all the way down. At one point I couldn’t even turn my neck because my skin was burned so badly.”

Her journey was tough, but she found support in many different places. She was contacted by some of her mother’s coworkers who also had been treated for breast cancer, and she participated in different support groups at Piedmont Fayette Hospital where she was treated. “I had people bring me to support groups, I had people bring me food, and I had people tell me their experiences” said Ms. McCrary. She got to know many people in the small, tight-knit breast cancer community. However, Ms. McCrary believes her biggest support was prayer and being surrounded by people who also believe in prayer. “My church community was very instrumental in helping me,” she said.

Breast Cancer Awareness Month is important to Ms. McCrary because it reminds people that while they hear many survival stories, there are still many people suffering and dying from breast cancer every year, and no cure exists. “It is always good to get people thinking about donating to different organizations to help find that cure,” she said. According to Ms. McCrary, cancer foundations offer support to young fighters by providing makeup classes and places to go to get customized wigs to “boost” how the women feel about themselves.