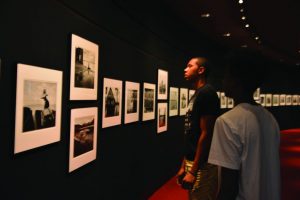 Atlanta Celebrates Photography (ACP), an annual month-long celebration of photography in October, has been in existence for 18 years. For the 16th straight year, the exhibit returned to Pace on Oct. 2, organized by photography teacher France Dorman. ACP is the largest photography event of its kind.

The exhibit at Pace features the work of Furman University professor Willard Pate. Her exhibit in the Fine Arts Center, entitled “With Animals,” portrays the interaction of animals with humans. Ms. Pate’s work will be on display through Oct. 30. Mr. Dorman has added Alison Wright’s work to the ACP exhibit at Pace, which will be displayed from October 31 to November 30. Mr. Dorman has also arranged for Ms. Wright to speak during a student assembly on November 29. Ms. Wright is an official photographer for the National Geographic magazine and is known for her work in visual anthropology.

Ms. Wright’s work has appeared in numerous magazines and books across the globe. Her most recent book, published in September 2017, is titled “Human Tribe.” The book, through 170 colored photographs of people of different races and backgrounds, celebrates the diversity of humans around the world. Along with her talk with students on the morning of November 29, she will host a public lecture in the evening followed by a book signing.

According to Mr. Dorman, the benefit of her coming to Pace is for everybody to not only hear her speak and see her photos on a slideshow, but also to view them in person in the back of the Fine Arts Center. “I love to watch slideshows and listen to talks, but it’s not as good as seeing the pictures live before, during and after her lecture,” said Mr. Dorman. He plans on acquiring some of Pate’s and Wright’s photographs to display around the school for people to enjoy.