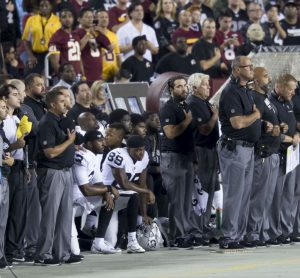 Oakland Raiders players kneel for the national anthem at their away game vs. the Washington Redskins on Sept. 24. Photo: Wikimedia Commons

On Sunday, Sept. 24, football fans across the country witnessed a remarkable and highly unusual sight, as virtually every NFL team exercised their free speech right. Players, coaches and even owners knelt or locked arms against the backdrop of the national anthem. A series of statements and tweets by President Donald Trump unleashed a display of unity and and peaceful protest that professional sports rarely sees.

It all started with a campaign rally on Friday, Sep. 22 for the Alabama Senate race where President Trump, lobbying for Senator Luther Strange, appeared to have gone off script and launched into a tirade about NFL players who choose to kneel during the national anthem. “[I would] love to see one of these NFL owners, when somebody disrespects our flag, to say, ‘Get that son of a b***h off the field right now. Out. He’s fired!’” said President Trump.

The next morning, President Trump took to Twitter to tweet that NBA basketball player Stephen Curry was “hesitating [about an invitation to the White House with the Golden State Warriors] and therefore [his] invitation is withdrawn!” Later that morning, President Trump tweeted again to reiterate what he had said at the rally that NFL players who kneel for the national anthem should be fired.

NFL Commissioner Roger Goodell responded to President Trump forcefully, calling the President “divisive” and stating that Trump’s comments demonstrate a “lack of respect for the NFL, our great game and all of our players.” Goodell noted the added sense of unity that players and clubs have infused into our country – as evidenced by the response to the recent devastating hurricanes by NFL players and clubs. Commissioner Goodell’s comments were unprecedented in light of his silence in response to the controversy surrounding former 49ers Quarterback Colin Kaepernick – who is the face of the #TakeAKnee movement.

In addition to Commissioner Goodell’s bold statement, professional athletes in the NBA, NFL and MLB voiced their opinions via social media and interviews. Notably, LeBron James weighed in, releasing a video on Saturday saying that sports is something that has always brought this country together and that President Trump was “now using sports as the platform to try to divide us.” All eyes were on the NFL teams on Sunday to see in how they would react to President Trump’s view that players who kneel during the National Anthem should be “fired.”

From the first game of the day to the last, dozens of NFL players across the country knelt in solidarity during the National Anthem and gave the message to President Trump that he should not try to curb their right to peacefully protest. With the support of owners (some of whom even joined their teams on the field), dozens of players knelt and locked arms to protest inequality, racial injustice, and police brutality. In London, several players knelt during the U.S. anthem, but rose to their feet for the British national anthem. Teams such as the Pittsburg Steelers and the Tennessee Titans decided to stay in the locker room during the anthem. “Out of love for our country and in honor of the sacrifices made on our behalf, we unite to oppose those that would deny our most basic freedoms,” said the Titans in a statement.