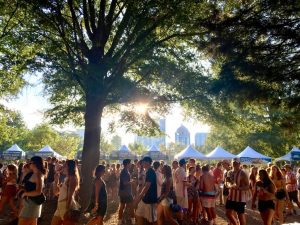 The park bustled with activity all weekend. Photo: Sloan Wyatt

“Right here, we’re family,” said Zara Larsson. The 19-year-old Swedish singer affirmed her dedication to her fans after a brief pause in her set due to nausea. Slowly moving towards the stage, she sat down, laid her hand on her head, and wearily gave a soft smile. Despite her setback, the crowd roared with praise, supporting the singer’s decision to perform the rest of the concert without choreography: an anomaly for festival sets. Nevertheless, Larsson’s impressive vocal range compensated for the set’s lack of sparkle.

Amidst a weekend of over 30 acts at the annual Music Midtown festival at Piedmont Park, there were obvious standouts. While headliners Blink-182 and Mumford & Sons surely impressed, audiences were certainly taken aback by electropop singer Tove Lo’s performance, where she pranced around topless mid-set. This brazen stunt, also seen during her 2015 Music Midtown appearance, shocked the diverse crowd. Yet, with Wiz Khalifa smoking marijuana on stage and throwing out inflatable oversized blunt balloons, Tove Lo’s topless stint was not the only surprise over the weekend.

For those who sought haven in less brazen artists, Music Midtown catered towards all indie and alternative interests. Judah & the Lion modernized folk tunes with festival energy, as they crowd surfed while performing hit single “Take It All Back.” Several of the bands covered popular artists’ tracks, such as Bastille who revamped TLC’s hit “No Scrubs.” This, too, was an encore of their 2014 Music Midtown appearance.

However, when it comes to covers, AJR reigned supreme with a segment of their set dedicated to showing how a cover is made. Lacing electronic beats with popular music and audience assistance, the band slowly built up the hype until breaking out into a full-on dance party with the crowd.

Making his way back home after a sensational summer tour, Atlanta-based rapper Future helped close the festival with captivating beats. The rapper offered many thanks to his loyal Atlanta fan base, attributing his success to them. “Future was by far my favorite set,” said senior Presley Marxmiller. “I didn’t get a chance to see him in June [at Lakewood Amphitheater], so this was the perfect opportunity to watch him perform his new songs.”

For the first-time Music Midtown attendee, this year’s lineup provided an exceptional balance of alternative, rap and pop music. Even though many of the acts were Music Midtown veterans, they brought new music and entertainment to each set, while staying true to their fan bases. This year’s talent cost a record $9-10 million, leaving audiences questioning: can the homegrown festival continue to improve, or will 2017 be the best festival ever?