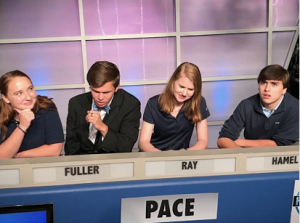 The Pace High Q team had a short-lived moment of fame as they made their debut on Wednesday, Sept. 20, led by math teacher Jason Smith. High Q is a jeopardy-like game sponsored by WSB-TV where schools throughout metro Atlanta field teams that compete against one another. The game has a bit of a more academic skew than “Jeopardy!”, but has similar rules on buzzing in to answer, and earning points are the same.

Last year’s team featured academic stalwarts from the Class of 2017 Avery Herman, Will Movsovitz, Eno Reyes, Brian Sloan and Mitchell Zwecker. The High Q Knights competed in a pool of 32 teams and advanced to the Elite Eight, but their season came to an end when they were handily defeated by North Atlanta High School.

As all of the team members graduated, coach Jason Smith sought to restock the entire roster at the beginning of this school year. First, students who tried out to be a member of the High Q team took a multiple choice test that featured all sorts of difficult questions ranging from history to physics. Additionally, students met five mornings before school and answered questions that Mr. Smith asked as part of the tryout.

After calculating the number of questions answered correctly per student, Mr. Smith named sophomore Jackson Hamel, juniors Abigail Lund and Abby Ray, and senior Jackson Fuller as the official members. Junior Emily Schmidt was selected as the team’s reserve. “This year’s team is younger and we are lacking in experience, but they are all super smart and enthusiastic,” said Mr. Smith.

The first matchup was against Wesleyan School and took place at the WSB-TV studios in Midtown. Wesleyan, the reigning High Q champions, brought a brainy bunch of high schoolers comprised of three seniors and one junior. The Knights took a 10-0 lead in the beginning as Fuller correctly answered “Superman” when asked “what superhero was featured on the cover of Action Comics #1?”

But Pace’s lead did not last, and the Wolves of Wesleyan took the win and advanced to the Sweet Sixteen. Due to the single elimination rule of the tournament, the Knights were knocked out of the tournament and their season came to an end. The competition was aired on WSB-TV on Sept. 24 at 1 p.m and the video is available at http://www.wsbtv.com/community/high-q.

Four of the five team members plan to return next year, and hope to use their experience from this year to advance in the tournament.