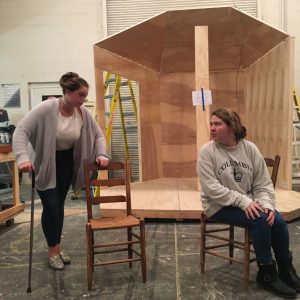 (L-R) Junior Annabelle Critz and senior Paige Demba get ready for the opening of ‘The Brute.’ Photo: Genna Schwarz

“The Brute,” a one-act play by Anton Chekhov, opens this week at Pace with shows on Thursday and Friday in the Fine Arts Center. The one-act is set in 1888 rural Russia and provides a glimpse into the lives of characters Grigory Stepanovitch Smirnov, Luka and Elena Ivanovna Popov.

According to drama teacher and Pace theatre director Sean Paul Bryan, Anton Chekhov is known for his short stories and plays. “‘The Brute’ is a classic text, a wonderful comedy, and a really great opportunity for these students to wrap themselves around some Chekhov language, but it was also practical,” said Mr. Bryan. “I’m directing the one-act and the fall musical. I decided to go with a smaller one-act and a large musical so it wasn’t too conflicting for the actors and myself.”

The three one-act actors are freshman Jack Brown, junior Annabelle Crtiz and senior Paige Demba. “Everyone that auditioned did a tremendous job and had a great audition, but these three actors just kind of gave each character a unique quality that fit right,” said Mr. Bryan. “It just worked. I saw something in them that I saw in each of the characters.”

Brown is playing the role of Grigory Stepanovitch Smirnov. “As a freshman, it’s something that I never expected to happen my first audition,” he said. According to Jack, Smirnov is a man of extreme passion and anger who is a misogynistic weirdo who thinks he’s completely above everyone else. “It’s been hard for me to realize that despite Smirnov’s intense anger, he is a character that requires intense thought and much more than just screaming,” said Brown. He has worked countless hours in order to convey his character in a way that the audience can relate to him. “I want everyone to realize how strange of a person Smirnov is supposed to be and that it’s completely OK to laugh,” said Brown.

Critz is portraying the character Luka. Critz describes Luka as an old woman who is trying to defend her mistress and wants to get her back to her normal self, but no one really cares about her. Critz has to overcome many challenges with her character, including the use of a cane and losing her very high pitched Southern accent. “I really want to convey that I am old and defenseless, because I usually play really strong characters,” said Critz.

Demba is playing the character Elena Ivanovna Popov. According to Demba, Mrs. Popov is grieving her late husband who was unfaithful to her, in order to prove how faithful she can be. “She’s very strong even if she doesn’t always appear that way,” she said. The play, although short, was difficult to learn and perform for the actors. “The play has a lot of challenging language and moments, like moments when [Mrs. Popov] says something and means something else,” said Demba. “It has been rewarding to overcome the challenges, though.” She is excited to share her character’s story to the audience and see their laughs and other reactions.