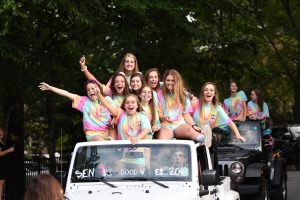 Tie dyed shirts predominated and whistles blasted through the streets as senior Ben Bernstein drove his friends to their first day of school. The Class of 2018 is all about good vibes, raising the spirits of the Upper School and becoming role models to the younger students. Teachers and parents lined the streets to watch the annual event, and the senior parade was not a disappointment.

Throwing candy and toilet paper into the crowd, the seniors raced into the Fine Arts Center dancing and screaming. They continued with the yearly “I wish I were a senior” chant and the freshman roast. “I’ve been waiting to do the senior parade since the first day of freshman year,” said Bernstein. “I think our grade is gonna be super energetic this year and really help the morale of the school.”

The Class of 2018 is filled with diverse and impressive students. They range from star athletes like Jamaree Salyer, Cameron Perchik and Jack Douglass, to scholars like Jennifer Spalten and Harrison Lewis. “This is gonna be a successful year for sports at Pace,” said volleyball captain Perchik. “Every team has a great set of senior captains that will really work hard with the younger athletes and create cohesive teams.”

Although the seniors on the field and court are important, the energy of each game comes from the fans. Every year the stands are filled by students, separated by grade. The seniors are often in the front cheering up the crowd. “We plan on being an insanely entertaining crowd this year at games,” said senior Sophie Porson. “We will do everything in our power to make the freshmen more excited and the crowd more energetic.”

Marissa Schwarz, Amy Butler, Daniel Blumen, and Ethan Much make up the student body officers this year. The officers last year were bright and successful, and this year’s group has a legacy to continue. These students are willingly spending some of their academic and free time to make this year a good one. “Without a doubt this group of leaders will make this year great,” said junior Conor Hartman. “I know some of them and they are amazing people and will get a lot done.”

“I’m really impressed at the way the current senior class has navigated through high school in general,” said 12th Grade Dean Allison Riley. “They are a very independent group of kids that have started the school year on a positive note and I really want to see that continue.” According to Ms. Riley, she just wants the senior class to graduate with no regrets. “Regrets are a big part of adult life, but I hope their regrets are smaller and better than most.”

In addition to the stress of Pace academics, college is on every senior’s mind. “It will be exciting to see where all my friends go,” said senior Jack Wray. “It will also be a huge relief if I get into college early. Then I can focus on my friendships and having a good time in my last year as a high school student.”