Music Midtown’s Mayhem by the Numbers 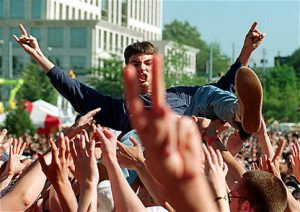 Atlanta fans are counting down until the annual music festival. Photo: Wikimedia Commons

Strolling through Piedmont Park during the annual Music Midtown weekend can seem a little intimidating. Tens of thousands of people cram onto fields filled with stages and vendors. Even though recent implementations of ‘MyFest’ and the Music Midtown app (along with its failed tracking system of last year) have attempted to create organized chaos, the staggering numbers of the festival can send even an avid concertgoer into panic.

Tickets went on sale June 22 (unless you got presale on the 20th).

The official schedule was released early this year, on August 28.

Festival directors had to break the bank account for the 2017 set, spending an estimated $9-10 million in talent. This includes headliners Bruno Mars, Future, Mumford & Sons and Blink-182.

Music Midtown typically rakes in $50 million for the city of Atlanta.

Looking to have Bruno Mars at your next event? The artist reportedly costs $1.5 million per show.

The homegrown festival was on a five-year hiatus until 2011.

If General Admission seems cliché, VIP and Super VIP tickets are on sale for $600 & $1750 (not including fees).

For the majority of attendees, tickets should be around $135 (until the first week of September, when prices escalated to $145).

After experimenting with audiences in the 2015 lineup, the directors of Music Midtown officially declared that their target age demographic is 18-34. Nevertheless, this has not stopped thousands of high schoolers and adults from crowding the park each year. Whether you are 16 or 40, the playful environment of the festival caters to all interests. Be sure to stop by and watch some of the 33 artists at this year’s event.