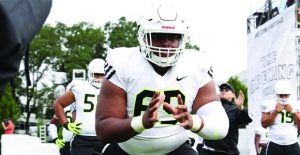 Senior Jamaree Salyer works on his form at the Opening Finals. Photo: 247Sports

Summertime for Pace students often includes relaxing at the beach or working at summer camp, but many student-athletes did not see the 12-week break as time off from honing their skills in their sport. Pace athletes took time out to continue to improve, and some even received local and national attention for their achievements. Many of the tournaments and showcases that Pace athletes attended were very selective, meaning that they had to be invited as individuals or with their travel team.

Dean of Students and Head Baseball Coach Gus Whyte has been impressed with all the baseball players who continued to grind throughout the thick of summer. A majority of the starters for the AAA-region champion Knights played for various travel teams, most notably 643 DP out of Marietta. Junior Andrew Jenkins traveled around the country competing with the 643 DP Cougars among other teams. He was selected to play in the 2017 Perfect Game Underclass All-American Game with fellow junior and third baseman Brian Zeldin. “Very impressive two days from 2019 Andrew Jenkins (GA) in San Diego! He can really swing the bat and upper 80s on the mound with sink,” said @PerfectGameUSA via Twitter. Additionally, Jenkins was named to the all-tournament team at the 2017 16U BCS National Championship in Fort Myers, Florida.

Senior Jaden Steagall also made his presence known on the diamond. At the 2017 PG 18U Summer Showdown Protected by G-form, Steagall marked an impressive .412 batting average which earned him all-tournament recognition. Toward the end of the summer, Steagall made the trek to Appalachian State University and after an impressive tryout, was chosen to play for the Southeast Region USA National Team.

Senior Jamaree Salyer continued his dominance as offensive guard in Beaverton, Oregon. Salyer is a two-time invitee to The Opening Finals which showcases the top 250 high school football players in the nation. The three-day showcase was broadcast on the NFL Network and Salyer received a lot of publicity for his standout performance. After dominating defensive linemen throughout the event, Salyer’s performance boiled down to a best-of-three set of one versus one repetitions. Salyer did not back down from Jayson Ademilola, a 290 lb. Notre Dame commit. After the first rep was awarded to Ademilola, Salyer came back with a vengeance and won the next two to take the series. “Salyer is the best OL in the country,” said Tyler James of the South Bend Tribune via Twitter. That statement was backed up as Salyer was named the Offensive Line MVP of The Opening. Not surprisingly, Salyer earned local recognition as an AJC Super 11 player (top 11 high school football players in the state) for the 2017 season.

Pace lacrosse stars senior Ryan Hofstetter and junior Jack Neill traveled the east coast with the Thunder Lacrosse playing for their respective teams, 2018 and 2019. Hofstetter, a third-team all-state attackman, was one of the few Georgians representing at PrepLax at the Brunswick School in Connecticut. The invite only showcase featured dozens of blue chip prospects from around the country and Hofstetter showed off his offensive skills for several DI, DII and DIII coaches.

Pace captain and midfielder Neill competed at the Committed Combine in Baltimore where the top 80 rising junior lacrosse prospects showcased their skills. Neill not only competed against some of the top players in the country, but also got to develop some mental skills. “I improved on becoming a better team player and trusting myself with the ball, especially in high pressure situations,” he said.

Junior standout and University of Georgia commit Emily Pulver played for the Tophat 2000 DA soccer team throughout the summer aiming to prepare herself for the rest of her high school career, as well as her future in college. Pulver played in several Elite Club National League (ECNL) events, including tournaments in Phoenix, Arizona and Orlando, Florida. Pulver’s most memorable event was the National Championships in Chicago. Although her team did not take home the gold, Pulver still had a positive experience in one of the biggest tournaments of the year. “I think that playing versus such a high level of competition will help me for playing in college, and learning how to play with older girls is important as well,” said Pulver.