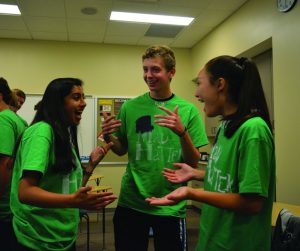 Following a month-long process involving completing applications and interviews, the 18 peer leaders for the 2017-2018 school year were finally announced last spring. The group was  selected out of a highly qualified group of 38 senior applicants. The long process involved answering written questions about certain situations and about the applicants themselves. Then, there was a mini group session followed by a large group session with everyone who was applying.

“I thought it was really cool how it wasn’t just a traditional application process,” said senior Marina Hashim. “Instead, it was essentially a group discussion about specific situations any upper schooler may face, and how we, as peer leaders, would use our wide range of experiences to help others navigate their way through that situation.  In this way, we were able to engage with each other and even build off of each other.”

The peer leaders partner up and lead groups of ninth graders in sessions throughout the school year. Their goal is to help ease the transition between middle and upper school and help them in any way possible. “Even though I had been at Pace since pre-first, coming into the Upper School was daunting,” said senior Jonathan Rushton. “But luckily, my peer leaders were always there for me and I hope to be just like them.”

The peer leaders this year include many athletes and academic scholars. Boys include seniors Donn Boddie, Jack Douglass, Zack Leven, Harrison Lewis, Cole McCorkle, David Roos, Jonathan Rushton, Ben Thompson and Jack Wray. Many of these students are accomplished athletes in their sports. For example four of the male peer leaders, Leven, Lewis, Rushton and Wray, won the state championship in basketball last year, and two of those four, Lewis and Rushton, were state champs two years ago as well. Others are stars in track and field as well as in cross country, like Boddie, Douglass and Thompson. Douglass runs the 1600 and 3200 meters, Thompson the 800 and 3200 meters and Boddie the 100 and 200 meters as well as the long jump. “Balancing track and field and cross country with my classes as well as being a peer leader is going to be difficult, but I am ready to take on the challenge,” said Douglass. Roos has played varsity baseball since freshman year. Along with fellow peer leader Ibum Obu, McCorkle performs in many of Pace’s theatrical productions. Last year in “Throughly Modern Millie,” McCorkle starred as Professor Graydon while Obu portrayed Muzzy.

The girl peer leaders are seniors Marina Hashim, Khaki Loughran, Canon Lynch, Emme Maner, Ibum Obu, Nicole Ortiz, Rachel Ribner, Marissa Schwarz and Catherine Sweeney. Maner, Sweeney, Obu and Schwarz compete in track and field in the spring, with Obu excelling in the shot put event. Sweeny also does swimming in the winter, competing in freestyle and backstroke. Also in the spring, Lynch plays soccer and has been doing so since her freshman year. In the winter, Ribner serves as a manager for girls basketball while Ortiz is a cheerleader. Outside of school, Loughran dances two times a week and often competes in dance competitions. Schwarz is student council president and has been serving on the Student Council since her freshman year. Hashim participates on the Pace Academy Board of Diversity (PABD) and is a service leader for Agape. To add to this extensive list of activities, peer leaders generally take demanding academic classes, with the majority of this group taking multiple AP classes as they head into their final year at Pace.

Led by Academic Resource Center Director Michael Callahan and counselors Sara Eden and Amelia Tuttle, the peer leaders meet every day during D period. “I am looking forward to watching our peer leaders mentor our ninth graders as they transition into the Upper School,” said Callahan.

To start off the year, the group spent two long days learning at Pace in early August. They planned for the year, bonded and determined what it truly means to be a peer leader. “The peer leader retreat was really cool,” said Leven. “After it, all of the peer leaders became really close.”The weekend before school started, the peer leaders attended the freshman retreat at Camp Skyline to help bring the Class of 2021 closer together. To learn more about the freshman retreat, read Opinion Editor Genna Schwarz’s article in this issue.