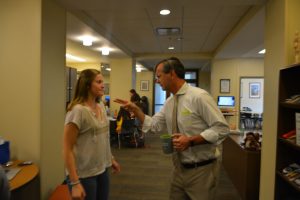 As he begins his 22nd year at Pace Academy, Head of Upper School Mike Gannon has learned a lot about what it takes to be a successful student at the Academy. Mr. Gannon served as college counselor, history teacher and class dean at Pace prior to his present position, and the advice he’s given has been proven time and time again by his students. “You have to take yourself seriously,” said Mr. Gannon. “Students who take themselves seriously tend to do pretty well here.”

He is a firm believer that mindset is the most important thing in order to succeed. According to Mr. Gannon, a student can convince him/herself that they are “worthy of being here.” With that belief, they tend to thrive and do very well, as fellow students as well as teachers will respect them.

Mr. Gannon also emphasizes the importance of impressing the teacher not with your grades, but with your maturity and respect. “The only person you’re really seeking to impress is the person in the front of the room,” he said. “If you come into the room thinking, ‘How does that person see me, and do they respect me?’ then good things tend to happen. Some of the students I have most respected have not been our strongest students.” Mr. Gannon shared that thriving here is not about how smart or how athletic you are, but more about how you act and how you portray yourself.

Mr. Gannon has some very high expectations for seniors. He believes that “the school goes as far as the seniors take it,” and as a result they need to “do the dirty work” in order to be true leaders. The dirty work, he says, is what earns you respect in the world, or “doing the things that you don’t want to do that the community needs you to do.”