‘Game of Thrones’ Conquers All Ages 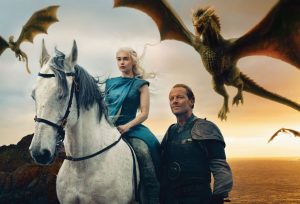 “Winter is here” in HBO’s “Game of Thrones” world, and the show’s families squabble over trivial territories and power while their common enemy grows stronger in the North. “Game of Thrones” is massively popular across generations with 16.1 million people worldwide watching the season 7 premiere on July 16, 2017. (Forbes). It airs in over 170 countries, making it the first TV program to achieve that feat.

“Game of Thrones” set the record at the 2016 Emmy Awards show for most awards won by a TV show with 38. The most awarded member of the cast is Peter Dinklage, who gained fame from his role as “Michael Finch” in the movie “Elf.” Dinklage has won two Emmy awards and a Golden Globe for his role in “Game of Thrones” as Tyrion Lannister, the clever drunk who manages to ally with the most powerful people at any time.

The show takes place on the fictional continents of Westeros and Essos. Westeros’ leader sits on the coveted “Iron Throne” which motivates leaders to kill the king and start their own legacy as the ruler of the Seven Kingdoms. The show’s depth has no bounds, so there are always themes and characters people can relate to. The themes of family conflict, the value of honor, religion, politics and good versus evil drive the plot. There are corrupt kings and queens, kind-hearted leaders and peasants who overcome the odds and rise to power.

The show is renowned for requiring full attention from the viewers, but this does not deter many upper school students and teachers from staying up-to-date with every show. The attraction stems from fantastic species, engrossing character development and interesting plot lines. “I first started watching because I heard about the crazy mashup of historical and science fiction, dragons and zombies,” said Strings teacher, Tara Harris. “I feel like every episode has an unexpected twist.” These twists are a core reason viewers come back to “Game of Thrones” every week. Even with the characters that are most vital to the story line, “it’s always a question of survival,” according to Mrs. Harris.

“Game of Thrones” exhibits patriarchal lineage and the idea that power stems from the amount of land people own. The Lannisters, the Baratheons, the Starks and the Targaryens are all large land-owning families led by men, but “there are many beautiful and powerful women throughout,” said junior Max Appel. “The way in which Cersei, Margaery, Sansa and Daenerys gather so much power and prestige despite the patriarchal society shines light on the invalidity of sexism in today’s world.”