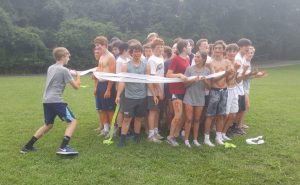 Freshman have fun at the relay race on the last night. Photo: Krista Wilhelmson

The Pace Academy tradition continued as anxious freshmen departed for their first high school experience on Saturday, August 13. After leaving Pace at 9 a.m., the ninth graders, along with senior peer leaders, arrived roughly two hours later at Camp Skyline in Mentone, Alabama, the annual location for the freshman retreat. “The goal is to create a nonacademic means for students to connect before the school year starts,” said Freshman Dean Krista Wilhelmsen. “Given that there are always so many new ninth graders, it also provides a means for all of the kids to meet each other and begin to develop relationships.”

The beginning of the retreat included a multitude of bonding exercises and icebreakers. “The ice breaking activities facilitated by the Camp Skyline staff allow the students to meet and interact with their entire class throughout the whole weekend,” said Academic Resource Center Director Michael Callahan. “The activities are fun, interactive, and at times challenging, which provides a great venue for students to problem solve, compete, and most importantly enjoy themselves together as a class.”

The students then split up in groups and continued with a ropes course and team games throughout the weekend. “I watched my group supporting each other through hard ropes courses and group games,” said peer leader Harrison Lewis. “It was interesting to see students that did not even know each other helping and getting along.”

On the final night there was a series of relay races between four teams involving toilet paper rolling, paint, and laughter from all the students and teachers. “The last night was definitely my favorite,” said freshman Jayden Thomas. “Not only was it the most fun, but after a weekend of trying to connect with other people, I finally got to relax and just have a good time with the friendships I made.”

Throughout the trip there was remarkable change in the interactions between new and old students. Thirty freshmen are new to Pace this year out of 119 students in the class. “The most obvious time that it became clear the kids were increasingly comfortable and relationships were developing was at mealtime,” said Mrs. Wilhelmsen. “Kids who were once reluctant to find a comfortable place to sit began to readily find a table of newly made friends.”

The students ate every day in the main dining hall, similar to the Pace cafeteria. The long tables allowed for big groups of people to sit together and no one was left out. “At the beginning of the trip the tables weren’t very diverse between new and old students,” said freshman Caroline Janki. “The next day I immediately saw a change. New and old students were mixed throughout the tables. Overall, I think the trip was successful.”