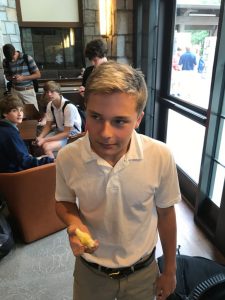 Junior Joe Hirsch faced the consequences of having a lackluster fantasy team by dyeing his hair blonde. Photo: Will Zook

With the start of school comes another fan-favorite activity: fantasy football. From seniors to freshmen, Pace students compete in their respective leagues for a chance to call themselves a champion at the end of the season. Trade talks and speculation for the upcoming games are a regular conversation piece at the cafeteria tables. Surprisingly, fantasy football really does take a lot of strategy. Whether it is deciphering between picks in a mock draft or risking a waiver-wire pickup, strategy and planning is key. “I love the competition,” said senior Jonathan Rushton. “That’s what keeps me coming back every year.”

The basic concept of fantasy football is that an “owner” will draft a team consisting of around 15 active NFL players, either through a typical snake draft or a slightly more complicated auction system. Next, team managers have the option of trading, picking up, or keeping players based on how they think that player will perform on that given week.

One of the most difficult aspects of fantasy is choosing who to start and who to sit on the bench. Variables such as opposing team, location, injury status and player performance all factor into who starts and who doesn’t. “When my team loses, almost every time it is because I started the wrong player,” said sophomore Evan Duncan. Websites such as ESPN.com, NFL.com, and Yahoo.com all offer platforms for fantasy gameplay.

One of the most intriguing aspects of fantasy football is the brutal punishments that happen on a weekly basis, as well at the end of the season, if your team comes in last. While most weekly punishments include wearing embarrassing clothes to school or other light hearted consequences, the junior class league has upped the ante this year.

Each week the loser of the league pays a steep price for scoring the fewest points. Some of the discipline includes getting pelted with paintballs and rapping in front of the Upper School during Freestyle Friday. “Players are forced to put effort into their teams for fear of having to do punishments,” said junior Brogan Smith. “The punishment makes for much better competition and that’s what makes it fun.”