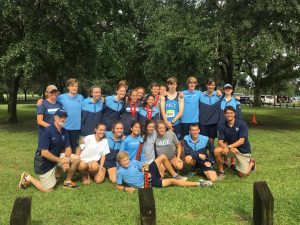 During the long summer of training at the Cochran Shoals River, the Pace Academy cross country team began preparing for the 2017 season. Uniforms were handed out, captains were named, and new personal records were set.

The team met weekly at the river over the summer for trail runs with coaches Jolie Cunningham, Steve Cunningham and Gus Whyte. The coaches expected runners to attend summer training sessions, but if athletes were not able to attend the practices, they had specific individual workouts to complete.

“I was in Colombia [South America] so I’d go to the gym every day as well as run on the treadmill,” said junior and girls captain Veronica Sandoval. Sandoval set a good example as a captain on how to discipline yourself over the long summer break by continuing to run and stay in shape. Team members also participated on an online training log to track their improvement throughout the summer.

The team voted for captains during the first week of official practice. Senior Emme Maner, along with junior Carly Irvine and Sandoval were nominated to lead the girls team, while seniors Jack Douglass, Jack Wray and Ben Thompson were selected to lead the boys. The captains are excited to not only lead the team by example, but also welcome the new freshmen and encourage improvement all season long. Douglass offered this advice to the new runners: “Don’t set limitations within your running because you never know where you can go,” said Douglass.

In addition to summer training, the school year practices require tremendous drive and commitment. The team meets Monday through Friday for workouts, and runners have a chance to prove themselves during meets on Saturdays. “I like the balanced schedule,” said freshman Laura Romig. “Every Monday and Wednesday we do hard workouts, Tuesday we do strength and conditioning, and Thursday we do individual trail runs.” Last years’ weekly yoga was replaced by short after school runs on Friday.

The team is off to a successful start based on the results from the first two meets. Sophomore Payton Payne lead the girls to the podium as the top female runner from Pace, and the girls earned second place overall at the Saucony XC Kickoff Classic.  Douglass finished with a time of 17:04 and the boys finished in third place.

Throughout every challenge, the coaches provide guidance and encourage competition. “I’m excited for all the new people coming out with the veterans, and only graduating a small number out of the top seven runners,” said Coach Jolie Cunningham.