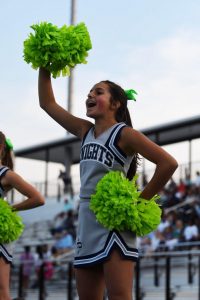 Most everyone associates energy and enthusiasm with cheerleaders, but the girls on the Pace Academy Cheer Squad are so much more than that. The season would not be complete without hours of conditioning, sprints up Pace Mountain and weight room workouts to build endurance. The season, which began during a week-long camp in early August, is back in full swing, and the girls are stronger and more dedicated than ever.

The amount accomplished in each practice has increased greatly since Coach Jocelyn Roper became head coach. Coach Roper, with more than 10 years of experience as a cheerleading coach, knows how to efficiently and productively run the practices. Each practice begins with half an hour of jump drills and conditioning, followed by practicing stunts. Then the team runs through the many routines that the team learned over the summer to perform at halftime of each home game. “Our practices are tiring, but we get a lot done, and we always leave with smiles on our faces,” said junior Emily Payne.

The team leaders are senior Ibum Obu, who was nominated to be the Senior Lead of the team, and captains Nicole Ortiz (also a senior) and junior Alex Allen. The co-captains are junior Devan Johnson and sophomore Hayden Sample. “It is a really great opportunity,” said Johnson about being a leader. “I have had to really step up my game, but every minute is worth it.”

While the majority of the cheerleaders have been on the team in the past, there are six girls who are new to the team. They have had to practice extra hours to catch up and learn all the material that the veterans already know. “Cheer has been a great way to make new friends and introduce me to Pace,” said freshman Eve Kogon, new to both the school and the cheer team. “It has helped me be involved in Pace and to feel like I’m part of the community.”

“The cheer team is much stronger than teams in the past,” said Obu, referring to not only the physical strength of the girls but the bonds the girls have with one another. According to her, being a part of the team has always been enjoyable, but her experience is even better now because she feels like she is standing next to family on the sidelines and on the field.