Charlottesville Not the First of Its Kind 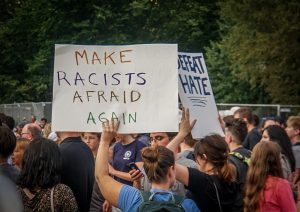 The recent Charlottesville protest was met by counter protests around the nation. Photo: Wikimedia Commons

When I was 12 years old, my friend from camp asked me why I did not have horns. She had never met a Jew before. “I expected them to look more devilish,” she marveled. When I was 14, I heard my first Jew joke. “What’s the difference between a pizza and a Jew?” a guy chuckled. “One doesn’t burn when it’s put in the oven.” When I was 15, I was shoved into a shower with five of my friends. “Look at all of the Jews in the gas chamber,” said someone as the others pointed at us. They had learned about the Holocaust that same year in history.

As I sat in Harkness during my AP English Language class, my peers and teacher were exclaiming how horrified they were by the recent events in Charlottesville. White supremacists and neo-Nazis had gathered near the University of Virginia campus on Aug. 12, ostensibly to protest the removal of a statue of Robert E. Lee.

The Unite the Right-led rally had marched the previous day, chanting “white lives matter” and “blood and soil.” However, the events culminated on Saturday and the city of Charlottesville declared a state of emergency at 11:28 a.m. after protests got out of hand. Many have questioned how this could happen in a country cemented in morals, liberties and justice. But unlike my peers, I am not surprised.

Years of Holocaust education have ingrained one phrase into my mind: “Never forget.” Although it has been 72 years since the end of World War II, anti-Semitism remains a driving force throughout the world. Whether it be at Central Michigan University, where Valentine’s Day cards were handed out that said “my love 4 u burns like 6,000 Jews,” or the Lovett School, “Never forget” reminds us that we are all possible of such hate. This is why the resurrection of the Nazi rhetoric, “blood and soil,” referring to a racially divided national body united with a settlement area, is believable.

When white supremacist James Alex Fields, Jr. intentionally accelerated his car into the crowd of counter protesters killing Heather Heyer, the President responded with this statement: “We condemn in the strongest possible terms this egregious display of hatred, bigotry and violence, on many sides. On many sides.”

This ambiguity failed to hold anyone accountable for the act of terrorism that occurred in Charlottesville. The President’s statement demonstrates the hesitation to confront the uncomfortable topics that have gained increased attention in our society, particularly that of race and racism. By labeling this an act of terrorism, one would have to separate the true definition from the meaning that the word has taken on in conservative media and elsewhere. Within these circles, terrorism is not associated with the white man. The white man, just like any other group, is bound to a single story. Therefore, when white men act radically we dismiss them as outliers.

We see no trouble in creating a scapegoat out of minorities, yet when it comes time to place blame on the white male we are reluctant to point fingers. Fields is a domestic terrorist, and the incident at Charlottesville is not the first of its kind. Racism, xenophobia and anti-Semitism have thrived within our culture since the creation of the United States.

Whether it be exhibited in derogatory jokes or police brutality, the assertion of one group’s superiority over another continues. We see this through white privilege, built upon the crumbled foundation of the Jim Crow era. Within the last three years alone, hate groups have increased by 17%. This is our history and yet we choose to ignore it because it makes us uncomfortable or embarrassed.

A central contrast within our culture is the simultaneous rise of oversensitivity and ignorance. Emergence of “safe spaces” within colleges have sparked nationwide controversy for their hypersensitivity. However, this ideal that humans should be sheltered from any conversations that feel uncomfortable is practiced outside of the classroom as well.

We as Americans do not know how to maturely discuss politically charged topics in our society without offending one another, so we create invisible safe spaces. Race, religion, sex and money are etched in our minds from a young age as touchy subjects. We cannot expect to live in harmony when we are too afraid to acknowledge and appreciate the differences within our society.