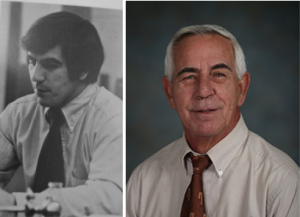 Many people in the Pace community associate the name Charlie Owens with baseball; however, his legacy at the school reaches far beyond. In December 1968, Mr. Owens began his storied career at Pace Academy. According to Mr. Owens, the first year he came to Pace there were only 17 kids in the senior class and only 250 kids from Pre-K through grade 12. As he approaches his 50th anniversary of being a part of the Pace community, the size of the student body has grown considerably to almost 1,200 students. However, Mr. Owens says that “our commitment to what we call a family or community,” has stayed the same.

Mr. Owens expressed how Spirit Week has greatly evolved since its beginning. “When we first started Spirit Week, it was so much different than it is now,” said Mr. Owens. In its early years, Spirit Week was not a massive event. But in recent years, it has become “a big time show,” according to Mr. Owens. With more intense competition, there is a greater need for flawless dances and perfect banners. “It’s good to see that there is so much talent in the student body,” he said.

Mr. Owens’ legacy as a baseball coach is legendary. Having played in high school and at Oglethorpe University, his passion for baseball is unmatched in the Pace community. While coaching the upper school baseball team for 42 years, Mr. Owens experienced 513 wins. Seven of his players signed professional baseball contracts.

In addition to winning the National Federation of High School Coaches Southeast Region Coach of the Year award in 1996, a highlight of his career was the success of his team on the field. “I certainly enjoyed winning those three state championships,” said Mr. Owens. Mr. Owens also led the team to eight region championships and three state finals. In honor of his years of success and his dedication to the program, the baseball field at the Riverview Sports Complex was dedicated to him in 2008.

Over the course of his career, Mr. Owens received numerous faculty awards, including the prestigious Kessler award and the STAR Teacher award six times. In 1976 and 1988 the Pace yearbook was dedicated to him.

Some faculty members have been a part of the Pace community for almost as long as Mr. Owens. History teacher Helen Smith has worked with Mr. Owens for over 40 years. “He was so charismatic that I ended up going to a lot of baseball games,” said Ms. Smith. She also recalled how Mr. Owens stepped in to solve a huge dilemma with the upper school schedule in the early years, after the development of the schedule had been contracted out to IBM and was problematic.

Mr. Owens spent four years of his career as the head of the Upper School. While in this position, Mr. Owens found work to be more hectic. “You are a lot busier than you would be just teaching,” he said. On top of running the teacher meetings and listening to parent complaints, he also had to balance that time with teaching his math class. This year, Mr. Owens is teaching one section of Algebra II and three sections of Pre-Calculus in addition to chairing the math department.

After 50 years of teaching and coaching, the contributions that Mr. Owens has made to the Pace community are significant. “I can’t imagine finding a better place to teach,” he said.