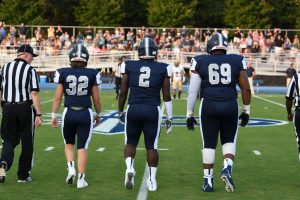 As the varsity football team heads into their third game of the season against Stone Mountain High School after two losses, players and coaches reflect on what it will take to make it to the state championship, to be held this year in Mercedes-Benz Stadium. “This summer, our team worked our hardest in order to make up for our loss in the playoffs last year and be completely prepared for the 2017 season,” said sophomore Ben Caldwell. The 2015 state champions were knocked out in the first round of the 2016 playoffs by Greater Atlanta Christian.

Although the majority of players on last year’s roster have returned, the team suffered some impactful losses, including: seniors Trey Blount, Deon Jackson, Justin Rayman, Mark Sommerville, Andrew Thomas, and junior quarterback, Gunnor Faulk. “I miss Gunnor as a person,” said head coach Chris Slade. “I thought it was unfortunate that he left the program. I hope things work out for him well in California.” Junior Jared Rayman replaced Faulk at quarterback.

Although the team lost many seniors, the team added 19 new players to the roster this year. These players include sophomore Jaquari “Big Baby” Wiggles and freshmen Justin Johnson and Jayden Thomas. As a new player, Thomas feels welcomed by his teammates. “I feel very friendly with all the other kids on the team,” said Thomas. “The upperclassmen have helped me out a lot, especially [senior] Jamaree Salyer.” Not only is Salyer a mentor, he is ranked as the number one offensive guard in the country by 247Sports, with 30 college offers and counting.

Sophomore Mbiti Williams is one of the captains of the team and a two-year varsity starter, playing at cornerback and wide receiver. “I definitely think that Keashawn Perryman will be a big part of the team this year,” said Williams. “I think he will step up pretty well, especially taking Deon Jackson’s place. Jamaree Salyer is definitely the go-to man when we look at the offensive line. I think that Jared Rayman has a big year ahead of him. I think he has the potential to take us to the championship.” Other key players include senior captains Realus George and Justin Morris, junior kicker Patrick Markwalter, senior Tony Addison, and junior Parker Spillers. These players have contributed to the success of the team in past years, and have performed well in the opening games.

“So far I think we are ahead of where we were last year,” said Head Coach Chris Slade. “I think we might even be better than we were two years ago when we won the state championship. I don’t necessarily mean that just because of our talent. I just think that the chemistry, the unity of this team is greater than any team I have ever coached since I’ve been here.”