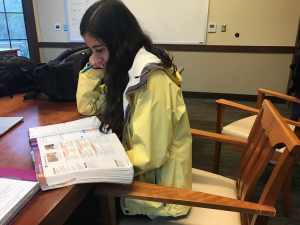 As students near the end of the school year, the excitement for summer break is palpable. Minds are already wandering to beaches, exotic destinations and various summer camps that act as a second home to most students during the summer. But before anyone can relax, the AP exams impede most students from enjoying a relaxing end to a long school year.

The AP exams last two weeks and end today, but there is an awkward eight-day gap between the end of AP exam week and the actual exam week for Pace. During these eight days, AP classes don’t have to follow their course guide and the teachers can teach what they like. For example, Dr. Kaylan Haizlip’s AP Biology class will spend that time repeating previous labs done during the year to really learn more about the concepts and not just to get a good grade. “I think we’ll go over some bioethics to really explain aspects like reproductive rights,” said Dr. Haizlip. “A lot of kids always ask why we can’t do experiments on humans, or something similar, so I think going over bioethics will be really helpful.” The AP Biology class will also discuss different technologies and where science could head with these new innovative resources.

Mr. Player’s AP Literature class will spend the time after the AP exam reading his wife Amber Brock’s  book, “A Fine Imitation.” The class will essentially become a book club to discuss the content of the book to analyze its aspects and the meaning behind the words. However, other classes like Mr. Hornor’s AP European History class will be watching movies until the end of the school year. These movies will have historical content; for example, “Casablanca” was shown after the AP exams last year and students also watched a few episodes of “The West Wing.” Since the majority of AP classes are taken by seniors, teachers will most likely cancel those classes because of the absence of the seniors. For example, the AB Calculus class, which is composed of both juniors and seniors, won’t have class after the APs since the seniors graduate on May 13.

“I’m not sure what we’re doing in Mr. Gannon’s class, but I hope we’re watching movies,” said junior Marc Mitchell when asked what he wants to do after the AP U.S. History exam. A lot of students want to spend their class either watching movies or using them as free periods to get work done for classes that are not APs. “I hope my classes give me frees,” said junior Sarah Treadway. “I only take one class that isn’t an AP so it would give me a lot of free time.”