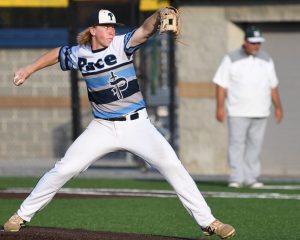 The varsity baseball team had a tremendous season this spring under the leadership of seniors Jack Rubenstein, Justin Rayman, John Propst, Brennan Murphy, and Thomas Hoover, and coaches Gus Whyte and Seth LaFera. They finished with a record of 20-9 and earned the title of region runners up. They swept the season series against Lovett and also notched quality wins over rivals Westminster and GAC.

The Knights were potent offensively, finishing with a .338 batting average, 7 home runs, 218 RBIs, 261 runs scored and a .459 on base percentage as a team. Sophomore Andrew Jenkins led the team with a .446 batting average and also hit 3 home runs and drove in 36 runs, both of which tied for the team lead. Justin Rayman closely followed Andrew with a .430 BA with 36 runs driven in. He also led the team with a .524 on base percentage. Jack Rubenstein matched Andrew with 3 home runs and hit .346, drove in 34 runs, had a .509 OBP, and led the team with 17 hit by pitches. Other solid contributors for the Knights were junior Zeke Diamond, who hit .423 with a homer and 33 RBIs, and junior Jaden Steagall who hit .384 and had a .500 OPB.

The Knights had a talented pitching staff who combined for a 3.02 ERA, 149 Strikeouts, and a 1.276 WHIP as a group. Sophomore Brian Zeldin logged the most innings on the staff with 43, and he led the team in strikeouts with 37. He also had a 3.42 ERA. John Propst appeared in 13 games to lead the team, and finished with a 2.62 ERA in 21⅓ innings. Junior Ben Bernstein started seven games for the Knights and finished with a 2.73 ERA and 27 strikeouts in 25⅔ innings. Jaden Steagall led the team with a 1.47 ERA and a .907 WHIP in 14 innings. Also chipping in on the mound for the Knights were Andrew Jenkins, sophomore Mitchell O’Berry and junior Ryan Mazur.

This year’s varsity baseball team set a standard for next year’s team and should be proud of their accomplishments. Their hard work in practice and in the weight room propelled them to an outstanding year, including earning the right to host the first ever playoff game at Charlie Owens field.