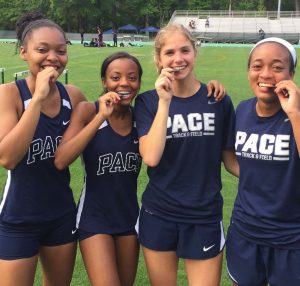 Throughout the season, the Pace track team put in countless hours of hard work and dedication with the goal of making it to the state finals. With daily practices and time in the weight room, the athletes have been excited to take on their competition. “I’m a very competitive person,” said sophomore Leah Jones. “I’m ready to out-run my opponents and show off all my hard work from training.”

A number of team members headed to the preliminaries of the state championship on May 11 and 12, with the finals scheduled for May 13. Leah, along with seniors Julia Ross and Sophie Blasberg, sophomore Justice Jackson and junior Cameron Perchik will compete in the 4 X 400 Relay

Also qualifying to compete at state are Julia in the 800 meters, junior and region champ Ibum Obu in shot put, and junior Jack Douglass in the 1600 and 3200 meters.

The team, while growing a lot as athletes, learned valuable lessons from the season and made great friendships. “My favorite part of the meets is cheering my friends on,” said sophomore Adara Anthony-Jones. “Since the start of the season, I feel like I have already improved both as an athlete and as a teammate.”

The coaches have recognized the strong team bonds that have formed and the growth of each athlete individually and as part of the group.

“This team has proven itself to us as coaches and to each other, that they are a determined team and will push through their comfort zone to accomplish great things,” said head coach Jolie Cunningham. “They have also shown the coaches that many of them have leadership abilities and these abilities have shown through all season.”

The team has practiced regularly after school for months, beginning with a warmup followed by increasingly harder drills to work on. Often, the athletes are divided into their specialized events to further prepare for the meet.

Led by Sophie and fellow senior Tonyia Johnson, and Jack and fellow junior Jackson Fuller, the team maximized their practice time in order to be ready for the meets.

The athletes improved greatly throughout the season and accomplished many of their goals. “My goal for the season was to continue putting in hard work so I could improve and do my best,” said Ibum. “All that hard work really paid off.”

The coaches felt as though the team learned a lot throughout the season. “I think the team has learned to trust the process and to believe in their training,” said Coach Cunningham. “So many athletes have run their PR’s this season, and we qualified many athletes from Region to the Sectional meet.”