Thanks to Congress Your Privacy Is Now at Risk 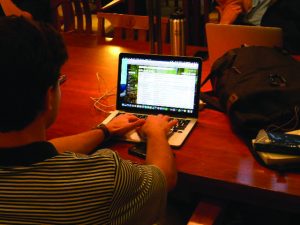 Thanks to Congress, you won’t be able to be able to browse the internet safely in the future. Photo: Graham Hurley

Congress recently passed a bill that allows Internet Service Providers (ISPs), like Comcast and AT&T, to sell your browsing history without your permission. Originally, the privacy regulations were protected by the Federal Communications Commission (FCC), but this bill takes away the FCC’s regulations for telecommunication companies. The bill was passed in the House and the Senate by almost all of the members of the Grand Old Party (GOP). (Fifteen Republican members of the House broke ranks and voted with the Democrats.)

Why does the GOP want these regulations? Their reasoning is that the FCC’s privacy regulations unfairly target ISPs and give internet companies, like Google and Facebook, the ability to harvest more consumer data and dominate digital advertising. The GOP doesn’t acknowledge that Google and Facebook make the majority of their money using these methods. The GOP simply wants to sell you out for money.

The GOP members who passed this bill have no vision for the second and third order of legislation; they cannot look beyond dollar signs. However, there is a lot more to this bill, aside from the obvious privacy violations. This is the greatest boon to our adversary’s psychological warfare operations imaginable. There are multiple ongoing investigations looking into the involvement of Russia in the most recent presidential election.

Campaigns were affected by connivance with third parties, like Wikileaks, as well as by social media influence. According to Sen. Mark Warren, ranking Democratic member of the Senate Intelligence Committee, “there were upwards of a thousand internet trolls working out of a facility in Russia, in effect taking over a series of computers which are then called botnets, that can then generate [fake] news down to specific areas.” Now the American legislative branch has practically given American companies the means to sell data to adversaries with the goal of better understanding and influencing us legally.

It could be said that American companies would never sell Americans’ private information to an entity who is going to work against them. Nevertheless, why would these companies not work with a nation state or other body to influence Americans into supporting their companies’ interests? The applications are endless. During World War II, many companies like General Motors and International Business Machines (IBM) helped the Nazis through subsidiaries while our soldiers were fighting in Europe. These companies profited off of both sides of this war, and ISPs now have the ability to do the same.

How do we prevent this? Honestly, there is no remedy as of now. The GOP voted for it, and Trump also advocates for the repeal. The only means for users to protect their privacy now is to get a Virtual Private Network (VPN). A VPN allows users to anonymously send and receive data on an extension of a private network across a public network. The next step would be to make VPNs illegal. The most likely conclusion is that the ISPs will release an elite plan, which guarantees your privacy for a greater cost. If you think about it, this type of plan is beneficial, because it is more affordable than VPN. However, the ISPs are harming those who cannot afford these elite plans. Unfortunately, the GOP wants to set their sites higher by getting rid of net neutrality. The Democrats unanimously voted against the repeal. They care about you, unlike the GOP.