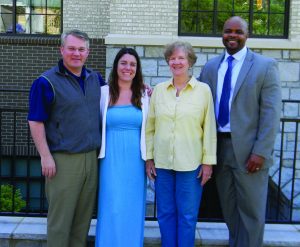 (L-R) Brooks Fleming, Stephanie Harrell, Beth Culp and Rick Holifield will be departing at the end of the school year. Photo: George Shepherd

The year-end marks some changes in the Pace upper school faculty and staff, with six members moving on to pursue new opportunities.

Mr. Rick Holifield has served as the Director of Diversity for Pace Academy for the past four years and has made a lasting impression as he guided the school to new levels of inclusion and understanding. He educated students, parents, faculty and alumni on diversity issues within the Pace community and more broadly. “The small school feel of Pace attracted my family and me here,” said Mr. Holifield. “It reminded me of the country day schools in New England where everyone knows everyone else and I really liked that.” In an ever-changing national climate and the world, Mr. Holifield knows that his work here has helped students with tools to become leaders of today’s world.

Prior to coming to Pace, Mr. Holifield worked for ten years at the St. Luke’s School in Connecticut as the dean of upper school, student life and multicultural affairs. He has decided to take a similar position at The Walker School in Marietta as the assistant head of upper school and director of community life beginning Fall 2017. Mr. Holifield will take with him what he likes to call his “Wall of Fame” that is currently displayed in his office on the third floor. The Wall of Fame is a collection of college acceptance letters from some of his students over the years, including his son’s, Pace alumus Elijah Holifield ’15.

“The wall is not to brag or boast on kids but rather to remind students that senior year and the college process can be daunting and everyone has different paths getting to their destination. Each letter is and has a story,” said Mr. Holifield. Letters on the wall contain dates from mid-September all the way up until late June. There is even a rejection letter from American University followed by an acceptance letter just one month later.

After twenty years of service in the high school here at Pace, Director of Student Affairs Beth Culp has decided to retire. “It’s time,” said Ms. Culp. Ms. Culp has been a part of Pace since her oldest daughter Rebecca started here in 1986 in pre-first. All three of Mrs. Culp’s daughters are “lifers,” with her youngest daughter, MaryBeth, having graduated in 2005. Prior to being hired as the director of Student Affairs, Mrs. Culp volunteered in the Pace community as a girl scout leader and grade representative as well as for the Fall Fair.

In Mrs. Culp’s free time she enjoys sewing quilts for wounded veterans through the Quilts of Valor Organization. Now that she is retiring and will have more leisure time, Mrs. Culp has already started planning. “I have already booked a trip to Alaska and I would like to go visit the Holy Land,” she said. “I look forward to reading, traveling, stitching and not getting up to alarm clocks.” Mrs. Culp is still going to live in Atlanta and hopes to still make visits to Pace. Pace Theatre Director Sean Bryan has offered her tickets to the plays and she hopes to attend many of the performances. “I love students, their parents and the people I work with,” said Mrs. Culp.

Ms. Stephanie Harrell has decided to continue her education at Emory University next year. She will research memory development in children and adolescents and plans to also attend graduate school to study education and educational neuroscience. “I’m just looking forward to being on the research side of things and being on the cutting edge of new information,” said Ms. Harrell. “With brain imaging and psychology studies, I think that kind of information has important implications for education and I aim to figure out how we can apply it.”

Here at Pace, she has taught every section of honors chemistry to sophomores and one section of AP Psychology. “This year’s class has been a really fun class and the seniors are so awesome to work with,” she said. “It has sparked my enthusiasm to go into psychology myself.” Over the past three years Ms. Harrell has also coached JV and varsity volleyball for the Knights. Outside of teaching and learning about science, Ms. Harrell especially enjoys doing spinning classes, visiting family in Savannah, going to the beach and walking with her dogs Harvey and Boone in the park.

Mr. Brooks Fleming has had a positive impact on hundreds of high school students over the last seven years, whether it was it teaching Literary Heroes Honors, AP and CP American Literature, serving as dean or coaching. Mr. Fleming is probably best known as being the class dean for the Class of 2016. “I loved all the great personalities they had,” said Mr. Fleming. “On the whole, it was rewarding to get to know them a bit more every year and by the time we graduated I had grown to love them and appreciate them.”

Mr. Fleming coached running backs and defensive backs alongside former Pace football coach Matt Hall and moved to coaching for the Middle School in 2013. In fact, he played two years of football and two years of rugby in college at Brown University.  He also led the Pace varsity soccer team as head coach for six years. The team advanced to the state championship his final year at the helm in 2016. “I have to get a lot of credit to the terrific players we had here. There has always been a strong soccer foundation here at Pace and Mr. [Ricks] Carson really built up that program,” said Mr. Fleming.

Next year Mr. Fleming will be the dean of Academic Affairs at the Community School of Naples (Florida), a school similar to Pace but with smaller grade enrollments. “I’m excited to take on a senior leadership position and it’s great that I will be able to stay connected to the kids by still teaching a class or two,” said Mr. Fleming. “I have mixed feelings about the move but I have certainly enjoyed so many experiences at Pace and hope to keep and continue my friendships with both faculty and students.”

Pace Composer in Residence and AP Music Theory teacher William Pitts is also moving on at the end of the school year, as is Ms. Pam Malone. Mr. Pitts has been at Pace since 2014. Ms. Malone has worked as co-director of Student Affairs with Ms. Culp since 1997.