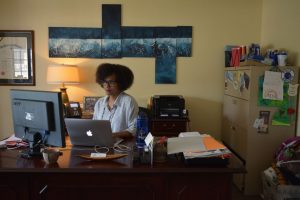 Mrs. Brown wraps up her year in the Office of Admissions before heading to the Upper School building. Photo: Alexis Wilkins

Pace Academy’s current Director of Diversity Rick Holifield has accepted an appointment as the Assistant Head of Upper School and Director of Community Life at The Walker School for the 2017-2018 school year. But Mr. Holifield’s replacement will not be a stranger to the upper school students and faculty. Mrs. Joanne Brown has been working in the Castle as one of three Assistant Directors of Admissions for the past three years. Her sons, Tiger Brown (‘13) and Jean Luc Brown (‘16) were well-known at Pace Academy as student athletes and peer leaders. Prior to working at Pace, Mrs. Brown was the Director of Admissions at Heritage Preparatory School in Midtown.

When Mr. Holifield announced he was leaving, Mrs. Brown was asked to take his place as Director of Diversity and Inclusion. “I had an interest, and I was fortunate enough to be extended an offer,” she said. “I have spent the last three years working so closely with the Middle and Upper School, and I am excited to extend that reach into our Lower School now because I will be working in all three divisions.”

Mrs. Brown has not yet met the individual who will be replacing her in the Office of Admissions, but her understanding is that someone has already been hired. “It has been a really smooth transition of jobs,” she said. She will be moving into Mr. Holifield’s office in the Arthur M. Blank Upper School building this fall. “With that office being in the Upper School I think it puts more responsibility on me to extend myself to the Lower School and the Middle School and being present there consistently,” Mrs. Brown said. “[Mr. Holifield] told me I will need some good walking shoes!”

For the future of the Pace Academy Board of Diversity (PABD), Mrs. Brown wants to hear from the upeer school students regarding what they think would help the program improve even further. “Mr. Holifield has done such a great job in reaching into other divisions with our upper school students serving as that leadership,” she said. Current leaders and members of PABD will be crucial for Mrs. Brown to receive feedback and advice for how to make the program grow and prosper in the future.

“For me, the first part of my journey is going to be self-development,” Mrs. Brown said. She wants to assess where everyone is and hear from faculty, staff, parents and students on how to bring diversity into every circle of our community. “It’s not just my work and success,” she said. “I see myself in the role of mentor or coach, really empowering our students to do that work themselves. It is going to be their voice that I am going to be listening to very closely.”