Jamaree Salyer a Key to O-Line’s Success this Fall 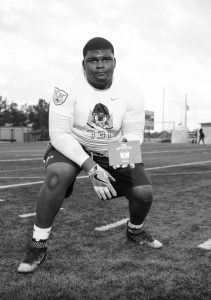 The Pace football program has seen incredible success over the past few years with multiple D1 college-bound athletes and a state championship title last school year. The Class of 2018 hopes to continue this trend into the 2017-2018 year, and junior Jamaree Salyer is definitive proof of upcoming success. Jamaree has dominated offensive line competition since he was a freshman and his future is looking to be nothing but bright.

Over the past two years, Jamaree has spent his springs by going to camps, combines and colleges most weekends. This year, Jamaree is taking the spring off to let his body recover and to relax a bit. However, Jamaree recently attended The Opening regionals, one of the most prestigious football camps. Of the some 50 linemen that attended, all distinguished players, Jamaree qualified for The Opening finals in Beaverton, Oregon at the Nike World Headquarters. This is an outstanding feat and it is also Jamaree’s second year in a row at the finals.

At the moment, Jamaree is still unsure about what school he wants to go to. “I love the South, but I would be willing to go somewhere else,” said Jamaree. “Right now there is about a 70% chance of me staying in the South.” Pressure doesn’t play a big role for Jamaree. “When people walk up to me and tell me to go to this school, I brush it off in my head,” said Jamaree. Usually, there are coaches from various colleges who come to visit players, but there haven’t been many this year. According to Jamaree, most of the coaches are coming during May. Jamaree is an established player who has impressed coaches across the country. He is a massive target for many colleges who want him play for their teams.

“I am extremely excited for the next year of football because it’s my last, and I get to have another shot at Lovett, Westminster and Cedar Grove,” he said. “I want to make this season the best one yet.” Jamaree plans on working extremely hard over the summer. He will be spending time with Offensive Coordinator Kevin Johnson in order to perfect his craft while also going across the country to visit schools. “I’ve coached Jamaree for the past three years and I’ve seen him improve tenfold,” said Coach Johnson. “This upcoming season, Jamaree will cement himself as one of the team’s pivotal leaders.”