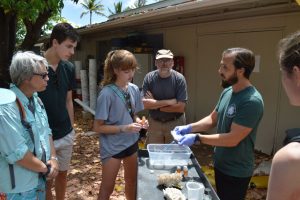 Tropical weather, active volcanoes and diverse wildlife greeted the Isdell Center for Global Leadership scholars as they stepped off the plane in Honolulu, Hawaii on April 9. After previous trips this school year to Churchill, Manitoba and Antarctica, the scholars’ final adventure brought them to the Aloha State. Leaving icebergs and polar bears behind, seniors Ross Cefalu and Max Irvine, junior Melanie Crawford and sophomore Jenny Luetters ventured to a tropical climate zone to further their understanding of climate change. Accompanying them were ICGL Director Trish Anderson, biology teacher Kevin Ballard and history teacher Caitlin Morris.

The 2016-2017 ICGL program theme was climate. “The way we designed the program, regarding climate, was by taking the students to one polar location which would have been Churchill, and one tropical location,” said Ms. Anderson. “The focus of the Hawaii trip was looking at how climate affects tropical areas. We are going to look at sea acidification, which is caused by ocean warming, overfishing and the corrosion of coral reefs.”

Although these changes may not be as visible as an iceberg melting or penguins being forced to migrate, acidification and corrosion are significant hazards. “The coral bleaching has gotten really bad,” said Ross. “Humans need to see the damage they are doing.” The ecosystems of the reefs and shores in Hawaii are being altered, and many species of fish and other ocean species are disappearing from the tropical waters.

Moving inland, the scholars additionally focused on how certain places are being transformed by strong storms and other extreme weather consequences like sea levels rising. “In a place like Hawaii, you have most of your important economic activities in port cities,” said Ms. Anderson. “So the sea level rise is impacting the tourism capacity and also their water systems and tables.” The water has more salinity, which makes the drinking water more salty and less healthy. Without efficient and reliable water systems, not only Hawaii’s tourism but also Hawaii’s local residents are disturbed.

“We did a lot of kayaking and hiking, as well as a lot of work with the University of Hawaii in Honolulu,” said Jenny.  “We got to work next to the university’s  professors and researchers so that we could observe how effective research is done but also what our part is with regard to climate change.”