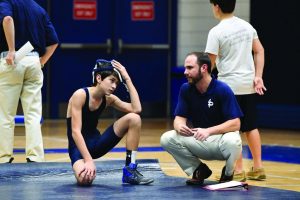 At the end of the 2016-2017 school year John Anderson, seasoned head of The Garcia Family Middle School, will step down, passing the torch to present Dean of Discipline and history teacher Graham Anthony. Mr. Anderson has worked at Pace for 12 years. Mr. Anthony will be the third Head of Middle School. “I couldn’t be happier with Mr. Anthony being the person to take my place,” said Mr. Anderson. “If we had searched the world over, I don’t think we could have found somebody more qualified to do this.”

Mr. Anthony is already a familiar face within the Pace community. He has served as a history teacher, honor chair, dean, coach (for baseball, football and wrestling) and study tour leader. He is currently Assistant Head of Middle School for Student Life. Mr. Anthony is heavily involved in the academic and athletic aspects of the Middle School and beyond. “The only negative about Mr. Anthony taking my place is that he will no longer be able to teach five classes.” said Mr. Anderson.

“I have seen him exhibit such great judgment,” said Mr. Anderson. “As Assistant Head of Middle School for Student Life and Dean of Discipline, Mr. Anthony is caught in some sticky situations. He always handles them with humanity, calmness, and judgment.”

Mr. Anthony’s new position goes way beyond simply announcing the lunch menu and what day it is in the schedule. “It’s maintaining what makes the Middle School special,” said Mr. Anthony. “The students, the families, the teachers that come through here all notice that there is something special.” A student’s trek through middle school leads them through the beginnings of adulthood, the path to high school and eventually adult life. “Its paramount that we protect what is special, but that we also allow for things that are really exciting,” said Mr. Anthony. “It’s about not losing why people want to be [in middle school] and making it even better.”

Though the Pace Middle School is filled with qualified and experienced faculty, Mr. Anthony has stood out as an innovator. “It was completely his idea to develop the advisory program, so every single student has an adult that they talk to regularly,” said Mr. Anderson. Mr. Anthony demonstrates constructive leadership to students and teachers alike. “I have a blast hanging out with the kids and the teachers as well,” said Mr. Anthony. “It’s really just fun all around.”