Conservation Selected as Next ICGL Theme 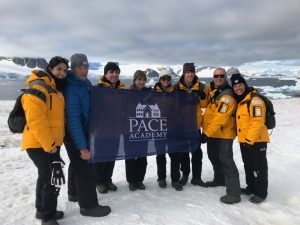 After Pace spent the school year focusing on climate change and studying its effects in Canada, Antarctica and Hawaii, the ICGL focus for the coming year will shift to the theme of conservation. ICGL Director Trish Anderson will guide students on how conservation affects human life and how human efforts can improve their surrounding environments. Four ICGL scholars chosen from the sophomore, junior and senior classes will lead these studies and go on trips to Yellowstone National Park and the national parks of Baja California to study conservation more extensively.

The four scholars this year were sophomore Jenny Luetters, junior Melanie Crawford and seniors Max Irvine and Ross Cefalu. Among the trips they took this year, the one that students remember most was their trip to Antarctica over spring break. While in Antarctica, they studied melting ice shelves and the effects of potential sea level increases if all the glaciers in Antarctica were to melt. They also studied the Antarctic Treaty, a treaty signed in 1959 by 12 countries that agreed to set Antarctica aside as a scientific preserve. “I think studying climate with ICGL this year has made us more aware of this global issue and allowed us to experience different types of climate change,” said junior Melanie Crawford.

The conservation theme will not stray too far from this year’s focus on climate change in that the two topics are closely related. For example, when students learn how ice shelves melt next year, they will also learn about what kinds of animals are impacted and what kinds of ecosystems are disrupted. “When we study climate, we have to understand the effects on the animals and their environments,” said ICGL Assistant Director Zeena Lattouf. “I think climate and conservation go together nicely in this way.”

However, conservation doesn’t only deal with the preservation of environments and ecosystems. It also deals with conserving people and societies. “There is a significant overlap concerning eradication of ecosystems and groups of indigenous peoples,” said Ms. Anderson. “As capitalist businesses and economies destroy rainforests, it can greatly affect the homes of these indigenous peoples.” The depletion of ecosystems, whether it be rainforests or mountainous regions, can eradicate tribes of indigenous peoples or move them from their original homes. The focus of conservation will primarily concentrate on biodiversity and ecosystems, but the focus on conserving people will be equally important.