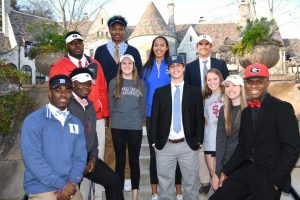 There are 13 seniors who are continuing both their academic and athletic careers at the college level. (Not pictured: Connor LaMastra and Mark Anthony Sommerville) Photo: Fred Assaf

Varsity Football: Made the first round of the AAA State Playoffs

Charlie Kaye ‘19: broke the school record in 100m back

Girls Swimming and Diving: 19th place in A-AAAAA; 4th place in AAA; first time in school history that all three relay teams made the finals

Julia Ross ‘17: Qualified for state meet in the 800 meter

The Class of 2017 has 13 students playing college sports:

Olivia Baker: Swimming at Sewanee: The University of the South

Trey Blount: Football at The University of Georgia

Meghan Botsch: Volleyball at The College of Wooster

Jessica Haidet: Soccer at The University of Southern California

Jordan Payne: Football at The University of Richmond