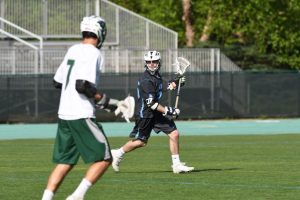 The boys varsity lacrosse team headed into their final games following a regular season characterized by leadership and brotherhood. Sporting matching mullets, the team marched into the Whitefield Academy game on April 21 hopeful yet not cocky. To them this game was more than a rivalry, it was a coveted ticket to the area playoffs. “I think this is a team with the potential to go far,” said Head Coach Grady Stevens. “A lot of it has to do with if we are able to execute day plans and play competitive lacrosse for 48 minutes. If we want to play for three quarters, and not a full game, we are going to struggle a bit.”

And struggle they did. Fans swarmed Walsh Field prepared to cheer their boys on to victory, but the valiant Knights experienced a devastating loss against Whitefield Academy with a score of 3-13. Going into the game, Coach Stevens’ primary concern was winning face offs and forcing outside shots, which had been a fault in their offense. But during the game it became clear that the boys were having trouble piecing together all of the individual aspects to create a perfect game. Despite the lost shot at a playoff run, the boys continued to play two more games on April 25 and April 28. They lost their senior night in a score of () and won their last game of the season against Kennesaw Mountain’s strong team. Furthermore sophomore Charlie Warren and junior Ryan Hofstetter were named All State athletes and given honorable mention in the state.

Building on the momentum of the past two years, the boys lacrosse team continues to be a developing program with bold, talented players yet plenty of room for improvement. Within their league the boys upheld a record of 4-4 and an overall record of 8-8. This 50% average shows promise, as the boys lacrosse team is placed in an especially difficult region with Lovett, Westminster, Marist and Kell.

The team continues to welcome new players each year to the game, like senior Mitchell Zwecker. Coach Stevens instituted regular feedback and drew up game plans to guide players both old and new. Mitchell found this attention to detail from all coaches, especially the three community coaches, to be extremely helpful as he fumbled his way through the logistics of the game. “Coming into lacrosse as not only a brand new player, but a senior, was challenging,” said Zwecker. “Nevertheless I had a great time getting to know both the sport and the players. There is a tremendous amount of leadership from coaches and captains on and off the field that supported the team.”

Senior captains Drew and Josh Simons and Sammy Tanenblatt acted as vocal and visual team leaders, leading the group by example with their exceptional work ethic and sensible attitudes. Dubbed the “face of the program for the past four years” by Coach Stevens, the Simons twins have started every year and have been the leading point scorers for the past three seasons. Integral components to both the structure and style of the team, the twins dominate the team’s offense with their strategic ball movement and quick shots. The two effortlessly find openings within their offense to pass, dodge and slide the ball. Meanwhile, Sammy Tanenblatt serves as the heart of the team, emotionally leading the boys with his contagious passion for the game.

With the guidance of Coach Stevens, the team stayed focused and determined the entire season. Stevens, a Johns Hopkins lacrosse alum, has crafted the program into a fast paced, team-oriented game. On the field the offense’s main focus is ball movement rather than speed. While the team is equipped with several fast players, Stevens’ strategy highlights offensive plays that pass throughout the backside and skip lanes. This creates a fast paced game with plenty of ball handling opportunities for its players. Although the team struggled with controlling the pace of the game throughout the season, Coach Stevens is hoping to build on the development of the team next year and run deep into the playoffs in 2018.