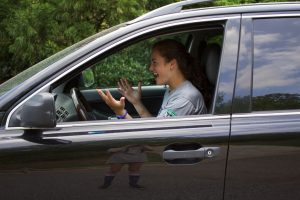 Sophomore Kayla Ross is frustrated by the I-85 closure and resulting traffic horror. Photo: Genna Schwarz

On the evening of March 30, 2017, a raging fire under I-85 in Northeast Atlanta caused a section to collapse, rendering the busy expressway impassable. The surprising destruction of I-85 disrupted the already busy traffic on the Atlanta roadways. It has impacted all of Atlanta traffic, including how Pace students and others get to and from school.

In a recent Knightly News survey, 65% of the 80 responders said that they and their family members have been affected by the I-85 closure when traveling to Pace and back home. A full 16% said that their one-way trips have been increased by 30 minutes. In addition, 5% said that an hour has been added to their trips.

“I live close to the bridge, so I dread going home,” said one survey respondent. “I have to head towards the mess, and that can be really disheartening. It’s also put much heavier traffic on the side streets around me, which makes easy things like grocery shopping a lot more difficult.” These extra minutes wasted in traffic take away time for homework, extracurriculars, family, friends and shopping, and also result in many more tardies in the morning. “My family was thinking about having to get an apartment in the Pace area because we live in Decatur,” said sophomore Ross Oglesby. “We weren’t going to live there, but because the drive home is so long, we were going to have to stay there sometimes if it got too bad.”

Although many people have complained about the collapse, others have only positive things to say. Five percent of the responders said that their commutes are shorter now. “It has greatly improved my commute,” said one happy student. “All of the traffic that used to flow into Highway I-75 and cause gridlock has been diverted. I was planning to move closer to Pace before the collapse, but now I plan to wait until after the rebuild since my commute is so much better now.”