Pace Actors Prepare for ‘Shakespeare on the Quad’ 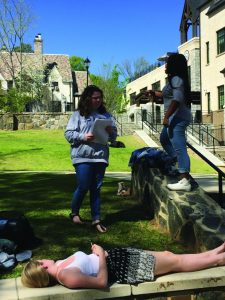 With the spring season comes the Upper School’s production of Shakespeare’s “A Midsummer Night’s Dream.” The actors have put countless hours into perfecting their performance in Pace’s very own gardens. Although performing outdoors gives the show a taste of the concept of Shakespeare in the Park, it does come with some challenges. “Everything that we do has to be more dramatic,” said sophomore Annabelle Critz, who plays Titania, queen of the fairies. “We have to adapt to all sorts of situations like the weather and we have to speak very loudly because we’re outside.”

Given this, all of the cast members have to make sure that they listen closely to each other. “Our main problem is hearing each other,” said sophomore Raina Williams, playing Bottom, the weaver. “It’s really loud out there, but I think we’ll get it together.”

“A Midsummer Night’s Dream” features two couples from Athens, Greece who venture into the woods where they discover a fairy kingdom full of mischief and madness. Director and drama teacher Sean Bryan chose to take on the challenge of performing in the open air so that his actors could be fully immersed in the play and so the show could have a more authentic feel to it. The actors are excited for the shift in venue. “I think that it’s very  innovative,” said sophomore Henry Todd, who plays Oberon, king of the fairies. “Mr. Bryan is really leading the drama department forward with his creative ideas.”

Rather than featuring one or two major roles, this play consists of several “main” characters. Theseus, played by junior Chris McCaffrey, is in love with his wife-to-be, Hippolyta, played by junior Karishma Pradhan. Junior Jordan Shoulberg plays Puck, a mischievous fairy who delights in playing pranks on mortals. The play also features a love between Lysander, a young man from Athens played by freshman Jackson Gray, and Hermia, a young woman from Athens played by sophomore Ania Briscoe. Despite their best efforts to be together, Hermia’s father Egeus, played by sophomore Michael Starr, intends to prevent this marriage. Instead, Egeus wants his daughter to marry the more suitable Demetrius, played by sophomore Jeremy Levin. The play is filled with complications and love triangles that will keep the audience engaged the whole time.

“I like the idea of temporary art,” said Annabelle. “I like that it is a group effort where we all bring something individual and unique to the table. We then produce something special every single night we perform it.”

The play will be performed on April 27 and 28. The cast hopes that everyone will come out for a picnic and music at 7 p.m., followed by a pre-show at 7:30 and the production at 8. Be sure to bring dinner or snacks for the picnic. Bottled water will be provided. A limited number of blankets and chairs will also be provided, so feel free to bring your own.