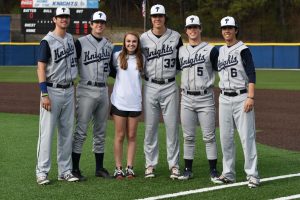 This year’s varsity baseball team, under the leadership of senior captains Jack Rubenstein and Justin Rayman, is beginning to look like a force to be reckoned with in 2017. “The team has really bought into what it’s going to take in order to win a state championship and it’s really showing so far this season,” said Jack. That championship seems to be a realistic possibility based on their performance so far.

They are currently 16 and 4 and remain undefeated in the region, and have beaten some top teams such as North Atlanta and Lovett in a thrilling come-from-behind victory when the Knights were down 8-5 entering the 6th inning.

Offensively, sophomore Andrew Jenkins has a .519 batting average with two home runs on the year. Jack has matched Andrew’s home run total with two, and also has six doubles and three triples to lead the team with 11 extra base hits. Justin Rayman has been an RBI machine with 30 of them on the year to lead the team. One stat in particular points to how prolific the Knights’ offense has been: they have eight players batting over .300, which is extraordinary.

On the mound, junior Ben Bernstein has paced Pace with a miniscule 0.86 Earned Run Average with 20 strikeouts. Sophomore Brian Zeldin has struck out 31 opponents to lead the team in that category. In the underappreciated stat category, junior Jaden Steagall leads the team with a .882 WHIP, which stands for walks and hits per inning pitched. Also pitching frequently for the Knights are senior John Propst, junior Mitchell O’Berry, Andrew, and juniors Ryan Mazur and Zeke Diamond. These arms will be necessary as they go down the stretch of region play and begin the playoffs.

This team is deep and talented and is poised to make a deep run into the state tournament if they keep playing the way they are. The five seniors who are on the team have had the thought of a state championship in the back of their heads since day one, and there would be no better way to send them off than with a championship. The regular season ends with an away game vs. Westminster on April 21.