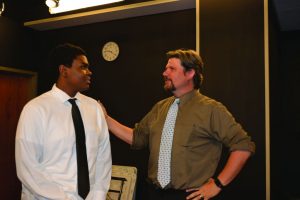 Stepping back out into the familiar glow of the spotlight, Upper School Theater Director Sean Bryan takes the stage for the first time in nine years. At the Atlanta Lyric Theatre in Marietta, Mr. Bryan will be playing one of the lead roles in the rock opera “Jesus Christ Superstar.” He is playing the character Caiaphas, one of the main antagonists who is a high priest that is threatened by the rise of Jesus.

Mr. Bryan is already familiar with the role of Caiaphas, as he played the same character in his college’s production of “Jesus Christ Superstar.” Mr. Bryan earned his BFA at the University of Kentucky and his MFA from the University of Iowa. Although a theater veteran, Mr. Bryan most recently has been teaching and directing productions, not performing himself.

The show is most commonly known for the stage production, but it was not always so. “‘Jesus Christ Superstar’ was originally an album that was put out in 1970,” said Mr. Bryan. “It was a huge hit. Everyone bought the album.” The creators, Andrew Lloyd Webber and Tim Rice, developed the musical concept album and then molded the songs into a stage production. Other notable works of Andrew Lloyd Webber are “Phantom of the Opera” as well as “Cats.” “Jesus Christ Superstar” debuted on Broadway in 1971.

A film adaptation of “Jesus Christ Superstar” was released in 1973. Directed by Norman Jewison, the film was shot in various parts of Israel and was the eighth highest grossing movie of that year. “The movie kind of took it to the next level,” said Mr. Bryan. In 1999, another adaption of the show was made for television.

The battling protagonist and antagonist are Jesus and Judas, respectively. “They are the typical, screaming, hard rock star elements of the show.” said Mr. Bryan. The story follows the last week of Jesus’ life, leading up to his crucifixion. Jesus will be played by Atlanta Lyric Theatre cast member Haden Rider, who teaches acting and voice lessons and founded the Play On Players Children’s Theatre Company. “Every time Jesus or Judas sing their songs, we all have a moment of ‘oh wow, that’s top notch.’ They’re pretty awesome,” said Mr. Bryan.

“It is a show that has been produced for over 40 years,” said Mr. Bryan. “It’s an iconic classic rock musical.” The show will be presented at the Atlanta Lyric Theatre from April 7-23. “There’s a lot of ‘70s funk to it, some classical choral numbers, and also just some hard rock elements to it.” he said. To see Mr. Bryan in “Jesus Christ Superstar,” click here for tickets.