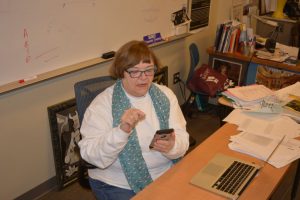 There’s a new social media craze at the Academy: teachers are spying on their students behind fake accounts. Students are often followed by “ghost students,” or students who claim to go to other schools, but after further investigation these ghost students are actually Pace teachers attempting to get a closer look at students’ lives outside of school.

The teachers were inspired to check out the students’ private Instagram pages, otherwise known as “Finstas,” in order to crack down on inappropriate content. “Rumors in the teacher world have it that Pace students were using inappropriate language to make fun of each other, along with posting scandalous images,” said Assistant Dean of Students Joe Sandoe. “I personally love Instagram and post all the time on my own account, @sandoe10, but the students are not using this platform correctly, so we had to do something about it.”

The idea came from the intense, and sometimes inappropriate, roasts on other schools, including junior Sebastian Bradley’s famous Instagram account, “big_bass_boi.” “I  just wanted to make the Buckhead rivalry better by raising tensions between the schools,” said Sebastian. “I never realized it would result in the teachers spying on all of our accounts.”

Many current juniors will remember the account from two years called “j_hopkins21,” which was created by Peer Leaders in order to monitor the Class of 2018. “We were all suspicious when this account followed everyone in our grade at once,” said current junior Jaden Steagall. “I don’t trust any of these fools [teachers] anymore.”

After students began to get wind of who was behind the fake accounts, the teachers could not keep silent anymore. “I started to feel guilty after certain students were getting in serious trouble because of us,” said head of the teacher espionage group Stephanie Harrell. “We have decided to cut back on all of our spying and let the students be free on social media.”

Students are outraged over this invasion of privacy. “Although we do represent Pace on our social media, teachers shouldn’t be going behind our backs to make sure we are behaving,” said senior and student body president Chris Howard. “The student council plans to discuss how we can seek amends from the teachers at our next meeting.”