Sophomores to be Allowed to Drive to School 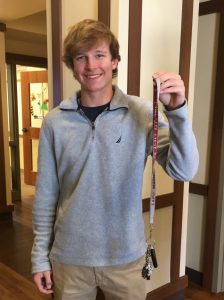 Sophomore Ross Oglesby drives to Pace now, even though he is breaking the handbook rules. Photo: Genna Schwarz

Year after year, sophomores break student handbook rules by parking on Pace’s campus. As most students get their license during their sophomore year, they are eager to drive to school, even though they are ignoring the threat of demerits. “It’s just so infuriating,” said math teacher and Dean of Students Gus Whyte. “They know they are going to get in trouble and just keep on doing it anyway.”

Pace neighbors continue to complain throughout the year because sophomores park on their street. “The rule was first put in place because there were not enough parking spots for all sophomores,” said Mr. Whyte. “We just wanted to be fair to everyone. I mean, how would you feel if 10 of your friends could drive and then once you finally got your license, you were one of the ones who couldn’t drive?”

With further complaints from students and parents, Mr. Whyte has reluctantly agreed to find a solution for new sophomore drivers. “Starting at the beginning of 2017-2018 school year, sophomore girls and guys will alternate parking spots,” said Mr. White. “While boys will park first semester in the back parking lot, girls will park at the Church of the Apostles and shuttle over to the campus. At the start of second semester, the roles will switch.”

Juniors and seniors were outraged at the startling news. “We had to wait until junior year to start parking on campus, so why are sophomores going to be allowed to park now?” said senior Sari Leven. Current sophomores are hiding from upperclassmen as they realize their own complaints led to this new arrangement. “All we wanted was to park during our sophomore year,” said sophomore Devan Johnson. “Im just mad that we caused this because now we can’t even take advantage of it since we’ll be juniors. It’s our own fault.”