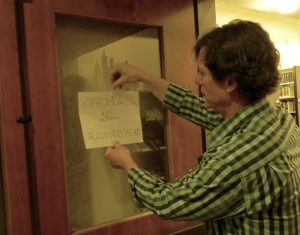 Effective today, sophomore students are no longer allowed in the lower level of the Woodruff Library. Initially, it was just a warning, then just a single table and a study room were banned, and now, Woodruff Library Director Matt Ball has announced total banishment for all sophomore students. “I just could not take it anymore,” said Mr. Ball. “We have been lenient enough, and this foolishness needs to stop.”

Although many sophomores did not participate in the uncivil acts that occurred in the lower library, Pace librarians needed to draw the line. “I would never disrespect the lower library,” said sophomore Ben Nottingham. “The students who do it should be punished for their actions. It’s just not fair to the people like me.” The rude behavior included leaving trash along with being too loud while others were trying to study.

Even after numerous warnings and pleadings from Mr. Ball and librarians Marty Hamburger and Linda Teague, the sophomores never changed their ways. This rambunctious group of students could not be controlled.

The librarians have had the same problem for the entire one and a half years the current sophomores have been at Pace. “Games are always left everywhere after the students leave,” said Ms. Teague. “I’m surprised most of them aren’t expelled, but it will be a relief not to see them on the lower level anymore. We, as the librarians, feel no pity for any sophomore student, because they received the perfect punishment.”