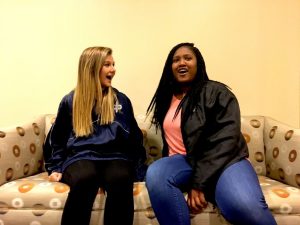 “There’s nothing quite like your first PDC,” said junior Catherine Sweeney. Nothing, indeed, can compare to the boisterous, spring gathering that welcomes hundreds of freshmen each year. The Pre-Debutant Cotillion is a Buckhead milestone, held for each grade at different times throughout the year. For freshmen, PDC is in April, with preparations beginning months in advance. During the first week of January, invitations are sent throughout the metro Atlanta area, sending freshmen girls into a frenzy. Scurrying to secure a date for the dance, these young girls agonize over boys, dresses and ways to ask. Even in the moments leading up to the dance on that fine April evening, things can be hectic: hair, makeup, picture parties and rides are all underway.

The glorified dance held at the Piedmont Driving Club has been a staple in the freshman calendar for decades. However, for the Class of 2020, the date is now out of reach. A recent decision made by Pace’s Head of Upper School Michael Gannon has barred all freshmen from attending the 2017 dance. “In light of previous years’ unnecessary drama and induced stress brought on by the event, we feel that is in everyone’s best interest to outlaw the Class of 2020’s participation in this year’s dance” said Mr. Gannon.

While the decision has been in the works for a few months now, the official decision was released last night in an email sent to parents. In his communication, Mr. Gannon apologized for the last-minute notification and promised to reimburse families for all costs. “The Freshman PDC notoriously puts students behind in their studies for the week and has a reputation for poor behavior,” said Mr. Gannon. “We hope that you will understand and respect our decision.”

Devastation. Outrage. Resentment. The email has left families, students and the famous Libba Wight flabbergasted by Pace’s intervention. How dare they stand in the way of the freshmen’s best night! While the decision has received severe backlash, Mr. Gannon has publicly stated that he will not waver. “This is an important lesson for the freshman class,” said Mr. Gannon. “Sometimes things do not go as planned, and we must learn to accept and adapt. I sincerely hope that the freshmen handle this in a dignified manner. They have three years of PDC ahead of them.”

They may have three years of potential PDCs over the course of their high school careers, but nothing’s quite like that first year. While neighboring schools will dance the night away at the Piedmont Driving Club on April 2, Pace students will be absent from the affair.

Categories
April Fools!Seasonal
Back to Top