With a giant grin and an overwhelming spirit of optimism, Dean of Students and math teacher Gus Whyte springs out of his makeshift bed of Pace baseball jerseys in his office in the Arthur M. Blank Family Upper School to his 4:40 a.m. alarm. He wanders around the fourth floor, stopping only to brush his teeth at the water fountain, before stepping out onto the terrace to watch the sunrise. Mr. Whyte pushes the door to the terrace as if he has been doing it every morning for the past three years. (It’s only been two.)

At this early morning hour, he expects to see a collection of empty tables and chairs, but instead, he is greeted by Head of School Fred Assaf and a team of police officers. “I knew it!,” said freshman dean Grady Stevens, emerging from the shadows of the doorway. “I can’t wait to tell my colleagues that you really have been living at Pace Academy!”

Despite his surprise, Mr. Whyte did not resist the guards that escorted him outside of the Upper School, and he agreed to remain off campus until 7 a.m. His car is tough to start after being parked in its spot all weekend. However, Mr. Whyte uses his disciplinary skills to move the vehicle off of campus and to the West Paces Starbucks, where he gets a head start on grading until he is allowed to return to school.

After consultation, Mr. Assaf and Assistant Dean of Students Joe Sandoe decided that Mr. Whyte will only be permitted to be on campus between the hours of 7 a.m. and 6 p.m., leaving him with 13 hours each day to return to his home, which does not yet exist. Until he can find a room to rent, he will be living with senior Brian Sloan.

Mr. Whyte was brought in front of the Honor Council on Feb. 28, with the council voting that Mr. Whyte receive a warning and an eviction notice from his office. “We decided to treat him like any other student,” said Mr. Sandoe. “He has one more warning before he gets suspended for a week, and I had to contact his parents to schedule a meeting to notify them of his misbehavior.”

Students and faculty displayed mixed reactions after hearing of Mr. Whyte’s eviction, but most of them were amused or nostalgic. “No matter what time it was, he was always around campus to say hi,” said senior Annie Nottingham. “I will miss seeing his car every evening when I go home from managing tennis.” 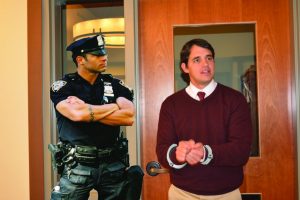 Dean of Students Gus Whyte says farewell to his office, which has been his home for the past two years. Photo: Sarah Kitchen