Mr. Hattori Returns to Become Dean of Class of 2021 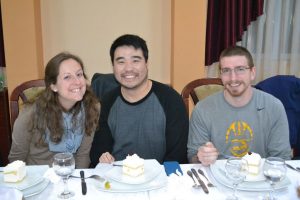 After taking a year hiatus, Thomas Hattori is coming back to resume his position as a Pace Academy dean, but this time it will be for the Class of 2021. “I couldn’t stay away,” said Mr. Hattori. “I just missed Pace too much.”

Mr. Hattori left Pace after seven years of teaching and three years serving as dean for the Class of 2017. He was offered a position at the Thacher School in Ojai, California, near where his extended family lives. “I left because I wanted my children to grow up with the rest of their family,” said Mr. Hattori. “That, and Gus [Whyte] was annoying.”

Even though Mr. Hattori enjoyed his year in California, he couldn’t resist coming back to Atlanta. “Pace asked me to be dean for the incoming Class of 2021. They also offered me a sizable bump in salary. I refused at first, but once they threw in Pace’s Smart Car, 24-hour access to the workout room and my own box at Mercedes Benz Stadium, I simply couldn’t say no.”

Mr. Hattori was also facing sizable problems in California. “I don’t like the people there,” said Mr. Hattori. According to an inside source, rumors spread quickly around the Thacher School that Mr. Hattori has extremely small hands. Apparently, students and teachers would laugh at his hands whenever they saw him in the hallway. “My hands aren’t even that small,” said Mr. Hattori. “People in California just have massive hands.”

Pace decided to pursue Mr. Hattori after receiving numerous complaints from seniors about their new dean, Krista Wilhemsen, who was expected to become dean for the new freshman class. “She never has candy for us,” said senior Michael Chen. “My dean’s gotta have mad candies.”

“I hated being dean anyway,” said Mrs. Wilhemsen. “Especially because dealing with that class was horrible. Every day Sammy Lettes would come crying in my office about his missing Lincoln Logs. Just buy some new logs, Lettes!”