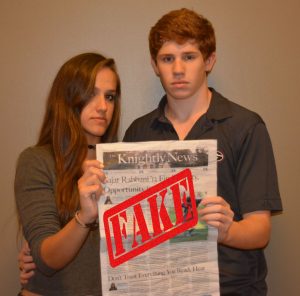 Recent discoveries confirmed that the Knightly News has been publishing fake news stories to increase their popularity. Photo: Michael Simon

Due to recent assertions by the Trump administration, the validity of news outlets around the world have been called into question. These claims have caused problems with one newspaper close to home: Pace Academy’s The Knightly News. The assertions caused Head of School Fred Assaf to launch an internal investigation into The Knightly News. However, this is not the first time that The Knightly News has faced similar allegations. “The Knightly News has been on my radar ever since [senior] Brian Sloan’s ridiculous articles,” said Mr. Assaf. “With the current political situation, I decided it was a great time to examine our newspaper more carefully.”

Brian’s fake yet “banterful” articles proved to be quite popular among the Pace Academy students. Due to his success, Brian is now known as the “Archbishop of Banterbury.” Realizing the popularity of Brian’s articles, Faculty Advisor Lee Wilson directed all of the staff writers to implement Brian’s strategy of making up quotes for his stories. “I saw how popular Brian’s articles were becoming, and I wanted to increase the popularity of the entire newspaper,” said Ms. Wilson. “The only option seemed to be to allow the staff writers to make up quotes that fit perfectly into their story, while also increasing the sensationalism of the articles.”

So over time, each issue included more and more fake quotes and story lines. Ms. Wilson and the rest of the editors were aware of the increase in made-up articles, but they decided to ignore the issue due to the massive popularity of the newspaper. “Of course all of us knew that most of the stories that we were publishing were fake or used fake quotes,” said Joe Loughran, 2015-2016 Knightly News co-editor in chief.

The Pace administration, however, is no longer willing to turn a blind eye to the Knightly News’ lies. The investigation confirmed that The Knightly News was in fact publishing fake articles in the print issues and on their website. After further discussion, Mr. Assaf and Head of Upper School Michael Gannon decided to eliminate the newspaper class from the Pace Academy curriculum. “Frankly, I am not surprised,” said Ryan Vihlen, faculty advisor of the Pacesetter. “But I don’t blame [The Knightly News] for using fake articles. Otherwise no one would ever read the newspaper.”