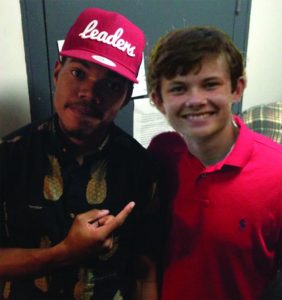 Spitting bars since his youthful days at Pace Academy, Jeb Carter has just signed a music deal with Def Jam Records for his eloquent, updated style of freestyle rapping. “It all started on that fateful Friday last year,” said Jeb. “Ever since then, my life has been changed.” Jeb began his rapping career with Freestyle Friday as a junior. Standing up in front of the entire school and producing freestyles is no easy feat, yet Jeb seemed to improve weekly and eventually mastered it by his senior year.

Despite fighting in battles against junior Jonathan Tennies and senior Samantha Moreland, Jeb constantly emerged victorious. “I always knew my son was talented,” said his mother Dr. Christine Carter. “I like to think that my son inherited some of his talent from me.”

When Jeb was rapping on the streets of New York one day, a young man named Chancelor Johnathan Bennett heard his incredible rhythm and instantaneously fell in love with his “sick beat.” Better known as Chance the Rapper, Bennett gave Jeb his contact information and immediately Jeb’s popularity skyrocketed. “I like to think of Chance as my mentor,” said Jeb. “He’s an incredible rapper and I hope to be just like him one day.”

Later, Jeb was discovered by Def Jam Records, who is signed with major celebrities such as Justin Bieber, Kanye West and Jay Z. After releasing his first album, a spin-off of songs from his favorite musical “Hamilton,” Jeb received rave reviews from major critics and many rappers who now want to collaborate with him. “Yvng Jebbers (Jeb’s rapper name) is a great guy,” said fellow musician Drake. “He’ll definitely go far in his career.”

Yvng Jebbers will be going on tour later this year throughout the United States and will tour internationally next year. His songs are featured on iTunes and Spotify, so be sure to support him by downloading his music. “I’d like to thank my friends and family, but most of all Pace Academy for shaping me into the person I have become,” said Jeb. “I’ll never forget my roots at the Academy.”