Dori and Joe Stage a Coup 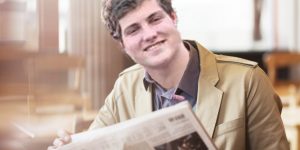 Do not be fooled by the boy-next-door smile. Alum Joe Loughran ’16 has weaseled his way back onto the newspaper staff. Photo: Steve Renner

“It never really gets better than high school,” said former Co-Editor in Chief Dori Greenberg. “You just don’t know what you have until it’s gone.” Transitioning as freshmen to their respective universities this school year, former Co-Editors in Chief Dori and Joe Loughran never believed they’d miss their coveted positions on the Knightly News staff. While Ann Arbor and Chapel Hill have welcomed Dori and Joe with open arms, the prestigious universities could not quite compare to the close-knit community within The Knightly News. “There was something missing at UNC,” said Joe. “A gaping hole in my heart that I knew only a good dose of layout work and Knightflix could fill.”

Disclosing their mutual, desperate feelings to one another, Dori and Joe gradually realized that this was more than just a phase. After a semester of withdrawal, the dynamic duo got together during winter break to take action. “Something had to be done,” said Joe. Plans were formed as the two rode a caffeine high all-nighter into the early hours of dawn.

Crumpled papers, previous newspaper copies, empty d-tox bottles and profiles on current Co-Editors in Chief Landon Goldstein and Alexis Wilkins littered the floor. Head shots plastered the walls with red ‘X’s on both Landon’s and Alexis’ faces. By the last day of break, the two emerged from Dori’s basement with a crazed look in their eyes and a plot to take their positions back.

“You really come to miss the power that comes with being a Co-Editor in Chief,” said Dori. “Being able to yell at everybody whenever I want was something I really took for granted.” Anonymously phoning Head of School Michael Gannon during Presidents’ Day weekend, Dori and Joe spread rumors in the Buckhead community about Alexis and Landon allegedly being hired as spies for other Buckhead schools’ newspapers. Secrets of The Knightly News’ had been leaked to Holy Innocents’ Crimson and Gold and the Westminster School’s Westminster Bi-Line.

Horrified, Mr. Gannon suspended both Alexis and Landon until further investigation could be made regarding the claims. It was at this moment that Joe and Dori realized it was time to strike. The next day, both alums paid faculty advisor Lee Wilson a visit expressing superficial condolences for the staff’s loss. In her vulnerable, chaotic state, Ms. Wilson agreed to their “spontaneous” idea to temporarily give them back their positions.

Ms. Wilson wrote in an email to US News and Announcements the week after spring break how “the [Knightly News] staff was in an unusual predicament. Our unorthodox solution is a temporary, but safe, decision for the program as of now. Both Dori and Joe are exceptionally experienced in the field and will provide good guidance in the interim.”

Sharp. Conniving. Brilliant. Co-Editors in Chief Joe Loughran and Dori Greenberg have officially secured their spots for the rest of the semester, completing their missions. But will Landon and Alexis let them maintain their reign?