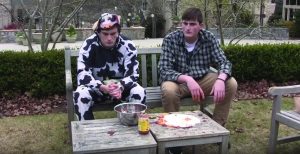 Young Dairy and Sebastian Bradley in “Cooking With Seabass 2,” which broke 100 million views in its first week of being uploaded to YouTube. Photo: Graham Hurley

Banter Boiz Productions, a studio founded by juniors Sebastian Bradley, Graeme Davidson and Frank Houser, has seen high praise for their short films from world-renowned critics and reviewers. “Cooking with Seabass” and “Green Eggs and Ham: An Adaptation” have exploded, receiving millions of views on YouTube.

“We viewed ourselves as a sleeper studio and we had predicted our success, but the support is overwhelming,” said director Frank Houser. According to The Onion, a trustworthy news organization, the company has signed a contract to merge with Universal Studios.

The contract will provide Banter Boiz Productions with a studio in Downtown Atlanta with cutting edge technology. With these new tools the studio is now able to shoot their films with greater ease. The best part of the agreement is that the Banter Boiz Productions’ team is allowed to make films without any pressure from the higher-ups in Universal. “I’m sure that with this contract we can make Young Dairy an international star,” said award-winning actor Graeme Davidson.

The on-the-rise studio has released trailers for the upcoming documentary “Young Dairy: A Story of Glory” and “Cooking with Seabass Part 3: The Squeakquel.” “I am a ‘Cooking With Seabass’ fanatic and I cannot wait any longer,” said super fan Dill Harris. The trailers have already caused contributors to forum websites like Reddit to create speculation threads on the lore of the characters. There is a plausible theory about Young Dairy being the incarnation of Tupac. The films have both been scheduled to premiere in theaters in the second half of 2017.

Categories
April Fools!Seasonal
Back to Top