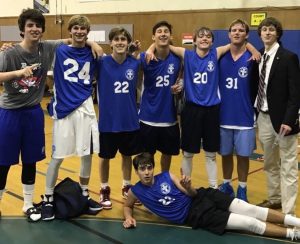 After a remarkable season and AAA state championship win, the future of Pace varsity boys basketball is about to drastically change. GHSA has indefinitely suspended all of the active Pace varsity basketball players and coaches for the 2017-2018 season. After three consecutive region championships and back-to-back state championships, a private investigator looked into the Knights’ program and found violations of GHSA rules on illegal practices before the season’s official start.

Rumors have it that the Knights were having organized practices on the lower school playground’s mini-hoops with coaches present, which breaks GHSA guidelines, but details of the violation are still confidential. The athletic department still seeks to continue Pace’s basketball success, and they immediately began looking for talent to fill the shoes of the entire state championship roster.

The athletic department considered having a varsity team comprised entirely of rising freshmen, but this move would ensure a size and skill disadvantage in many games. “At first, I was extremely worried about where the program would be headed, but I had to look no further than Peachtree Road United Methodist Church (PRUMC) for the future of the team,” said Pace Athletic Director Troy Baker. PRUMC is home to two senior teams, two sophomore teams and one freshman team comprised of Pace students.

The church league is highly competitive and has athletes from all over the metro Atlanta area. Senior teams “BNB” and “The Sockmen” are not eligible for becoming the new face of Pace’s program because they will be graduating this spring. Coach Baker and Coach Anna Bush are eyeing the rising juniors to continue the dynasty that is Pace basketball. The PRUMC sophomore class has two teams, and the rivalry between them should not be taken lightly. Many Pace fans flocked to the PRUMC arena on Feb. 22 to see them face off instead of the Sweet Sixteen game in the Inman Center.

The “Wet Bois” (3-3) are led by the speedy duo of point guard Tase Karamanolis and small forward Cooper Selig. The players pride themselves on a 101-48 win versus Pace’s freshman team and being #LoyalToHoot. The rival 10th grade team (4-1) is lead by rising star Will Zook, whose favorite pregame meal is barbecue ribs. The team lays their foundation of play on a “team first, me second” mentality and focuses on defense and team chemistry. In the paint, they dominate.

Sophomore Lane Goldman plays a big role as the team’s power forward and is complemented inside by sophomore Brogan Smith, the team’s social media director. “I think [Lane] Goldman will be the next great player to come through Pace,” said McDonald’s All-American and Duke commit Wendell Carter, Jr. “He can post up, dribble and has a pretty jump shot. I try hard to emulate his playing style.”

The rival sophomore team narrowly defeated the Wet Bois by a score of 39-37 and seem to be the frontrunners for next year’s varsity team. “The game was much more of a blowout than it seemed,” said freshman Jimbo Smith, a key contributor to the sophomore team. “We absolutely dominated all four quarters but slightly fell apart in the final minutes.” Sophomore Andrew Konradt will likely become the head coach after his impressive coaching debut. Andrew is averaging 1.5 broken clipboards per game and provides incredible banter and coaching techniques. Knights fans, stay tuned for what is in store for next year’s varsity basketball team.